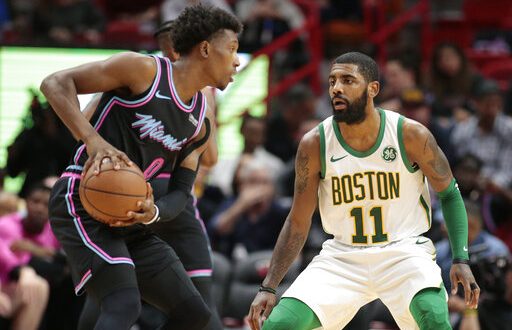 The Miami Heat had their 400th consecutive home sell out, and Heat fans roared with excitement as their team defeated the Boston Celtics 115-99 last night. Thursday night’s win snapped Miami’s two-game losing streak and they now have an overall record of 20-20.

That's now 3 straight wins over Boston, there's nothing lucky about that! pic.twitter.com/wo7bbevqAL

Thursday’s loss snapped Boston’s four-game winning streak and marked the team’s first loss in 2019, despite an attempted comeback in the third. Miami took the lead in the second quarter and did not let go. Despite a disappointing loss, Kyrie Irving posted 22 points, five assists and five rebounds for Boston. Marcus Smart followed behind with 18 points and Jayson Tatum contributed 17 points as well.

Celtics coach Brad Stevens says the Celtics fell to the Heat’s will.

Basketball is game of runs and Dwyane Wade knew Boston would make a run.

So he stopped them at the brink of collapse.

Miami led by as many as 26 points just after the half before Boston closed the gap, scoring 16 unanswered points. Then, Wade saved the day–scoring 12 of his 19 points between the four-minute mark of the third and the 10 minute mark in the fourth.

He [Wade] has a way of making us all look better,” Heat coach Erik Spoelstra said.

Wade dropped three stellar three-pointers before the end of the period to help Miami regain its double-digit lead.

Stevens gave credit to Wade for his ability to stop Boston’s run.

While Wade stole the show, other players contributed to the team’s success.

Josh Richardson followed close behind Wade contributing 18 points. Derrick Jones Jr. was all over the court, connecting on threes, finishing plays inside, getting rebounds, and making insane steals while putting in 14 points. Justise Winslow locked in 13 points and added a career-high of 11 assists after setting his career-high of 10 assists against the Wizards earlier this month.

The Miami Heat will host the Memphis Grizzlies on Saturday; it will be the last home game before the Heat go on a four-game road trip.