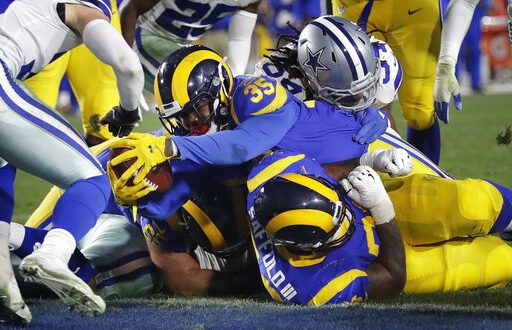 Anytime the Los Angeles Rams have 273 yards rushing it is easy to assume Todd Gurley had a big day.

That was not the case on Saturday though. It was CJ Anderson who actually stepped up and rushed for 123 yards and two touchdowns to give the Rams a 30-22 win over the Dallas Cowboys in the NFC Divisional Round.

CJ Anderson to The Rescue

Anderson, who joined Los Angeles in week 16, has been a big help to the team being more than usable in place for Gurley, who has been dealing with a knee injury.

The 27-year-old running back ended up getting more carries as he carried the ball seven more times than the 1st team all-pro. Anderson’s come up has allowed the Rams to bring back their pro-bowler along slowly. Gurley still made the most out of his 16 carries as he rushed for 115 yards and a touchdown.

The Cowboys Are Heading Home

Dallas got out to a good start as they found themselves ahead 7-3 at the end of the first quarter.

The Rams then scored 17 unanswered points in the 2nd quarter to take a 20-7 lead into halftime. The Cowboys had a hard time stopping Sean McVay’s offense, especially the run game. Dallas was out-rushed 273 to 50. It was the most rushing yards that the Cowboys have ever given up in a postseason game. Ezekiel Elliot carried the ball 20 times for only 47 yards and a touchdown.

The pass game sputtered as well for the NFC East champions as Dak Prescott passed for 266 yards and a touchdown.  Dallas did do a great job of protecting the football as they didn’t turn the ball over once. Time of possession was an issue for the Cowboys as Los Angeles had the ball for 13 more minutes. This was due to the fact that Dallas was 1-for-10 on 3rd down.

LA will be moving on to the NFC Championship game next Sunday.

The Rams will be heading to New Orleans to play the Saints, who defeated the Philadelphia Eagles 20-14. Kick off between the two prolific offenses will be at 3:05 p.m. at the Mercedes-Benz Superdome. The game can be seen on FOX.