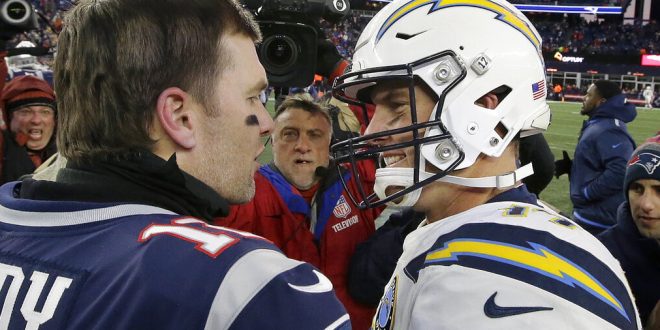 The New England Patriots (12-5) will play at Kansas City in next week’s AFC title game.

The Patriots defeated the Chiefs, 43-40, in Foxborough in Week 6. Therefore, the Patriots finished 9-0 at home this season.

Sony Michel, the first round pick out of Georgia, was a red zone sensation during the first half of the game as he recorded three rushing touchdowns.

Michel provided a threat to the Chargers that allowed Brady to complete 34-of-44 passes for 343 yards and a touchdown.

Edelman finished off the Patriots win with nine receptions for 151 yards as the receptions he marked against the Chargers led to the second-most he has ever had in a playoff game.

In 16 NFL postseason games, he has posted a total of 1,175 receiving yards on 98 receptions.

The 41-year-old quarterback has reached his eighth consecutive AFC championship game and had a message for his critics.

He said, “everybody thinks we suck and can’t win any games.”

It’s a theme that has been highlighted throughout the Patriots’ 41-28 divisional round victory against the Chargers.

Brady led the Patriots to this victory over the Chargers as he completed 34 of 44 passes for 343 yards and one touchdown.

For the second year in a row, Rob Gronkowski is considering retiring at the end of the season.

Gronk has been troubled with injuries throughout his career but said after the game, he isn’t thinking about the thoughts of retiring but is focused on helping his team win.

In 13-regular-season games, he has caught 47 passes for 682 yards and three touchdowns.

The Patriots play the Kansas City Chiefs in the AFC conference championship game at 6:40 p.m., on Sunday on CBS.

@_lmcarrr
Previous Rams Running Game Enough to Push Past Cowboys In NFC Divisional Round
Next Rhonda Faehn: Hire to Fire