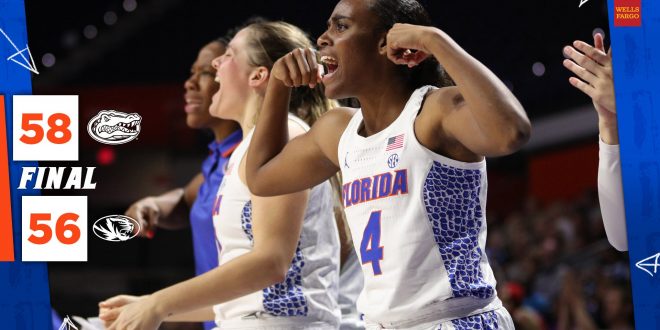 The Gators Women’s Basketball team defeated the Missouri Tigers, 58-56, at home for their first SEC win of the season.

The Florida Gators have been searching for an SEC win since last season and yesterday was the day.

The Gators shifted into gears by beating one of the top-ranked teams in the SEC. Hosting the Missouri Tigers, the Gators knew it was going to be a tough battle, but they stuck it out.

Something about this Gator team is special. When one person does not show up, their teammates have each other’s backs. Guard Funda Nakkasoglu struggled in today’s game only scoring two points and two assists on the day.

One of the Gators who stepped up big to seal this win was sophomore guard Danielle Rainey, who had 16 points shooting 5-9 from the three, seven of these points coming in the first half. Following behind her was Kiki Smith, who is starting to find her rhythm, netting 10 points and having her third straight game in double digits.

Alongside them came Zada Williams, who also scored 10 points. The Gators bench outscored Missouri 33-26, which started with Ariel Johnson coming off the bench and hitting a clutch three to help bring the Gators back to a single digit deficit.

In the first quarter, the Gators were struggling to get a bucket and only led for two minutes in this half.

At the end of the first half, the Gators trailed behind the Tigers 21-30.

Delicia Washington finished with 11 points, nine rebounds, four assists, and the game-winning drive to seal the game against Missouri.

The Gators rallied back from a 14-point deficit to bring the game back to single digits; one of the largest comebacks of the season.

This will be the Gators first SEC win since last season in February when they beat Vanderbilt, 88-71. This goes down in Gators Women’s Basketball history as the first time beating the Missouri Tigers.

A quote from Danielle Rainey about what coach Newbauer said in the locker room:

The Missouri Tigers came into this game 14-4 overall and 3-1 in the conference. The Tigers, who were on a 3-game winning streak in their SEC play, could not contain their defense against the Gators in the last seconds of the game.

They outscored the Gators through the first half leading 30-21 going into the third quarter.

Sophie Cunningham could not find her usual groove on the offensive end yesterday. She only scored two points the first half but dished out seven assists. Cunningham is on the watchlist for the Cheryl Miller Award, given to the top forward in the nation.

Fortunately, the Gators were able to contain Cunningham to only four points and eight assists, two of these points coming in the second half.

After this well-earned win for the Gators, they will have a week break before they get back on the road to Oxford, Mississippi for another SEC matchup against the Ole Miss Rebels. Tip-off is set for next Sunday at 4 p.m.