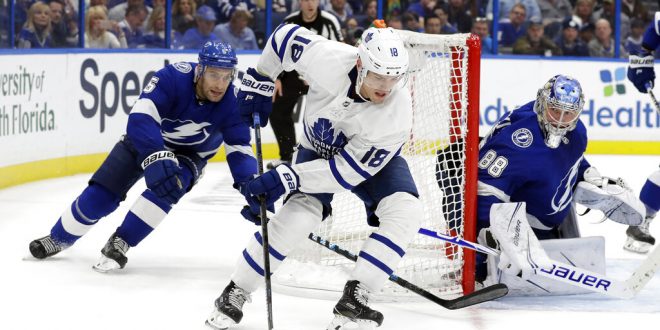 Tampa Bay Lightning strikes first, but end up losing 4-2 to the Leafs

For the second time in their last three games, the first-place Tampa Bay Lightning left the ice with a loss.

On Thursday, the Lightning (36-10-2) registered the first goal of their matchup against the Toronto Maple Leafs and were solid as a team statistically. In the end, however, Tampa’s divisional opponent made enough plays down the stretch to slightly close the gap in the Atlantic Division .

Even with their losses against the Leafs and the New York Islanders on Sunday, the Lightning are still leading the NHL with 74 points.

The Lightning got a strong boost from third-year player Brayden Point in the opening period at home.

Tampa’s goal to take the early lead started with Steven Stamkos passing it to Victor Hedman for a shot attempt. After Hedman’s shot could not connect, Point kept his eye on the puck and put it in the back of the net off a rebound. That was Point’s team-leading 30th goal of the season.

Unfortunately for the Lightning, their lead evaporated quickly as the Leafs tied the game up just two minutes later. At the end of the first period, Tampa had one more shot and nine more hits than Toronto, along with having a 60 percent faceoff percentage.

Keeping it Close, But to No Avail

The Lightning did an excellent job of keeping the game close and preventing it from getting out of hand.

Toronto broke through in the second period with a goal by Patrick Marleau to give his team a 2-1 advantage. 37 seconds later, Hedman was able to capitalize for Tampa to tie the game up at 2 apiece.

To continue this crazy sequence, the Leafs took a 3-2 lead with a goal by Mitchell Marner just over a minute later. Although the Lightning kept the score close for most of the game, their opponent put the icing on the cake with an empty net goal late in the third period.

Despite only dropping their tenth game, Tampa did well in the box score when it was all said and done. They took more shots, converted on a power play, continued to win faceoffs and finished with 13 more hits.

Hedman, who recorded his sixth goal of the season on Thursday, praised Toronto (29-15-2) for the challenge they presented them.

Hedman on tonight: “It’s disappointing. But we knew we were playing a good team and we just have to finish on a high note after this.” #TORvsTBL

As Hedman mentioned, his team will look to finish on a high note and continue to stay at the top of the standings.

Tampa will be back at Amalie Arena on Saturday to take on the San Jose Sharks. The Sharks will come into that game second in the Pacific Division with a 28-14-7 record.

After this weekend’s game, the Lightning will get some rest as the NHL All-Star Game will be played on Jan. 26. The players representing Tampa at the game are Nikita Kucherov, Stamkos and Andrei Vasilevskiy.

Previous Alabama vs. Tennessee Preview
Next Florida Gymnastics Are Set For A Top Five Match-up Against LSU