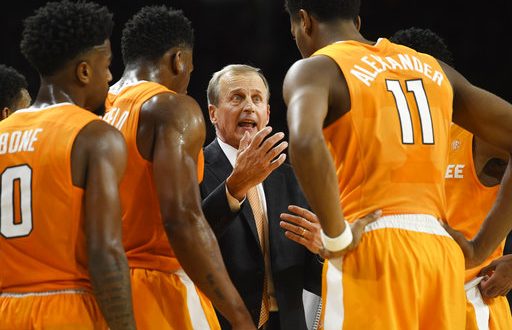 Tennessee coach Rick Barnes talks with his team during a timeout against Arkansas during the second half of an NCAA college basketball game Saturday, Dec. 30, 2017 in Fayetteville, Ark. (AP Photo/Michael Woods)

The No.3 ranked Tennessee Volunteers men’s basketball team will be taking on the unranked Alabama Crimson Tide this Saturday in an SEC matchup. Tip-off is set for 2 p.m. in Knoxville.

Coming off a dominating win over Arkansas on Tuesday, the Volunteers improved their record to 15-1 and 4-0 in the SEC.  Not only are they undefeated in the SEC, but on Tuesday, the Vols became just the third power-conference team in the past 20 years to beat their first conference opponents by a total of at least 100 points.

In SEC play, Tennessee has beaten Georgia by 46, Missouri by 24, Florida by 11, and Arkansas by 19. With a No. 2 ranked offense and a No. 22 ranked defense, the Vols have been an undeniable powerhouse this season.

Led by former SEC player of the year Grant Williams and senior Admiral Schofield, Tennessee is shooting an impressive 58.2 for two-point shots.

Going into Saturday’s matchup, Tennessee is second in the nation in field goal percentage, 11th in field goal defense, fourth in scoring margin, second in assists per game and assist-turnover ratio, and seventh in blocked shots.

The Tide Bouncing Back 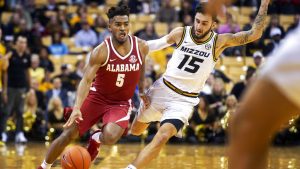 The Alabama Crimson Tide just snapped a two-game losing streak capturing their first win in the SEC beating Missouri, 70-60. This win improved their record to 11-5.

The Crimson Tide haven’t shown much offensively but they do provide secret weapons we are starting to see. In the win over Missouri, Avery Johnson Jr. who was averaging two points a game came off the bench and put up 14 points in 18 minutes of play.

The Bama offense is a very diverse group that likes to share the ball around. Defensively, they are quiet but have been a team that can produce turnovers and get rebounds.

Many people believe that Tennessee deserves the number one ranking, but Duke and Zion Williamson stand in front of them.

With Duke facing No. 4 ranked Virginia this week, this game versus Alabama is a must win for Tennessee. With a Duke loss, we can maybe see the Vols jump over Michigan to take the number one rank.

For the Tide, if they want to compete in this game they have to move the ball around. Shooting a 45 percent from the field as they have been won’t cut it against Tennessee.

If Avery Johnson and his team want to leave victorious, we are going to have to see the same pressure on defense and aggressiveness on offense we have seen in the past couple of games. Tennessee is hungry for that number one spot but Alabama may be in their way.

Previous Warriors Hitting Their Stride
Next Tampa Bay Lightning strikes first, but end up losing 4-2 to the Leafs