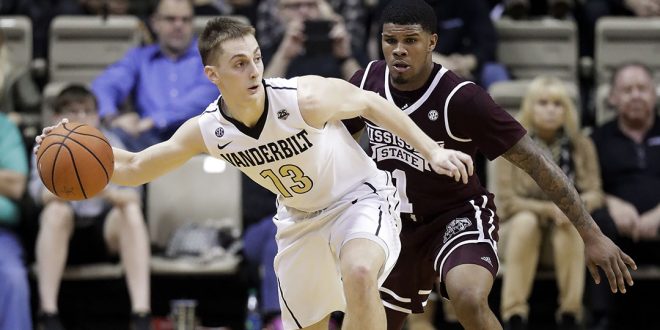 No. 24 Mississippi State Bulldogs are heading to Nashville, Tennessee for a SEC match-up against the Vanderbilt Commodores.

The Bulldogs are coming off a nail biting win, 71-68, against Florida on Tuesday. The Commodores lost to South Carolina on Wednesday, 74-71.

Head coach Bryce Drew said he is proud of his team, despite the loss.

Who Has The Edge?

Even though the Commodores have home court advantage, the Bulldogs are looking to come on top.

Quinndary Weatherspoon has averaged 16.6 points per game for MS State. He is the leader for the Bulldogs with Lamar Peters behind him at 13.8 points per game.

Leader Darius Garland for Vanderbilt isn’t too far from Weatherspoon’s average at 16.2 points per game, but he’s been out since Nov. 23 with a left knee injury. He will be benched for the remainder of the season.

Coach Drew says Vanderbilt are going back to basics.

But, basics might not to be enough to slow down Weatherspoon. This season, he’s possessed the ball for a total of 526 minutes, averaging 32.9 minutes per game.

Without their star player once again, the Commodores will struggle against the Bulldogs tomorrow night. However, they are learning from their defeat and are getting ready for a win.

Learn from it and get ready for the next one. #AnchorDown pic.twitter.com/2TQ1vOFZnv

After the game on Saturday, MS State will head to No. 12 Kentucky, and Vanderbilt will face No. 3 Tennessee, next week.

Catch the SEC match-up, Saturday at 8:30 pm on the SEC Network.

I am a fifth-year journalism major, specializing in sports and media. My favorite sport to watch and cover are college and NFL football. When I'm not doing that, I enjoy hanging out with my cat, going to concerts and traveling.
@sportsabrina
Previous Oak Hall Wins Overtime Thriller 59-55
Next LSU Set to Host South Carolina