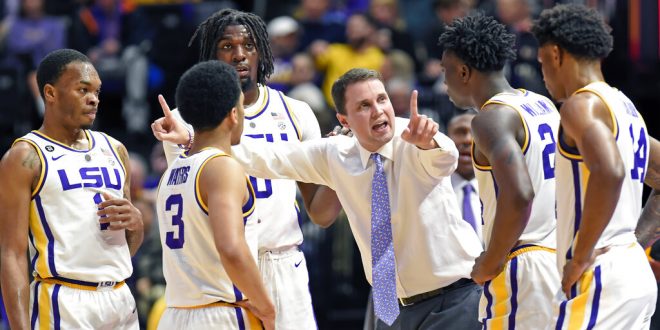 LSU head coach Will Wade has a word with his players, from left, Ja'vonte Smart (1), Tremont Waters (3), Naz Reid (0), Emmitt Williams (24) and Marlon Taylor (14) during a break in the first half of an NCAA college basketball game against Georgia, Wednesday, Jan. 23, 2019, in Baton Rouge, La. (AP Photo/Bill Feig)

The Tigers walk away with their 18th consecutive win at the Pete Maravich Assembly Center in Baton Rouge, Louisiana, on Wednesday night. Their impressive offense led by Tremont Waters was too much to handle.

Georgia has now lost four consecutive games and fall to 9-9 overall and 1-5 in conference play.

The Bulldogs had the lead as much as six points in the early latter of the first half. Until LSU, down 13-8 went on a 14-point run and never looked back. The Tigers outrebounded the Bulldogs 32-31 and had a 17-7 point advantage off turnovers.

The lead reached as much as 17 on three different occasions for the Tigers. However, Georgia was able to cut the lead down to seven with four minutes to play. LSU churned like a well-oiled machine and hit clutch free-throw shots to seal the victory at home.

All four of these players scored a combined 71 points, with Waters leading the way on a 26-point night off of 9-14 shooting. Waters is relentless when driving to the basket. His small stature is what impresses most NBA scouts as he has no problem with drawing fouls inside the paint. He shot 11 free throw attempts, knocking down seven of them overall. On top of that, he piled up four assists as well as four steals and no turnovers, further reassuring his niftiness and craftiness.

What’s interesting about the sophomore guard is that he’s seen his minutes, points, and three-point percentage drop since last season. They’re not significant enough to raise concern, however, his assists, steals, and field goal percentage have increased since his freshman debut.

Overall, Waters’ decreases are due to the helpful company that he’s received as of late with players like Mays, Reid, and Smart.

Third-year Mays dropped 20 points on Georgia off of 5-9 shooting. His point average increased from 11 to 13 since last year. Plus, he only averaged eight points a game his freshman season while averaging 22 minutes per game. His steady and gradual improvement throughout a year-to-year basis has Tiger fans on the bandwagon this 2019 season.

Furthermore, freshman stud Naz Reid has played a huge part in the frontcourt for LSU. He’s put up 13 points a game, but in these five conference games, he’s averaged around 15 points a game. That includes a 27-point stint against Arkansas. Not to mention, he’s grabbed over five rebounds a game so far this season.

As for Smart, his freshman season has not been overlooked. He’s already averaging 10 points a pop on 28 minutes and he’s been solidifying himself as an effective backup for Waters. Smart finished with 10 points and picked up three boards. He’s usually automatic from beyond the arc but he’s recently been on a two-game slump. Smart has only made one three-pointer in his last nine attempts. However, his defense and “smart” offensive decisions are what makes him so beneficial.

For the Bulldogs, they shot 53.6% from the field. However, that wasn’t enough to pull off the upset. They were led by Rayshaun Hammonds who finished with 18 points. Georgia had four players total who finished in double digits which includes Nicolas Claxton, Derek Ogbeide, and Jordan Harris.

Sophomore Hammonds is full of potential. He’s seen improvements in his scoring average from his first-year stint with Georgia. He now scores at least 13 points per game from a previous six points overall. Standing at 6’8, he racked in three boards and averages around six this season. His 7-11 shooting is impressive, however, his five personal fouls disqualified him and couldn’t help the team in the final minutes of the game.

Sophomore Claxton has averaged 12 points in his last five games, with two 15-point outings including last night’s matchup. He shot 4-8 from the field in 35 minutes and he’s also played over 35 minutes in the last four games.

Ogbeide is in his senior year and has increased his role with the team with each passing season. From averaging just four points a game in his first year to almost 10 points a game. Ogbeide notched 14 points off of 7-11 shooting against the Tigers.

LSU is away for the next two games. They face Missouri on Saturday and then travel to College Station to take on Texas A&M on Wednesday.

Georgia hosts Texas next for the SEC/Big-12 Challenge on Saturday at 2 pm.

Recent grad from the University of Florida. Editing all articles on here while helping out the newbies. Love all things basketball.
@@MarcoJMartinez_
Previous Gators women’s basketball set to face off against No. 7 Mississippi State
Next Wednesday Woes for Magic and Heat