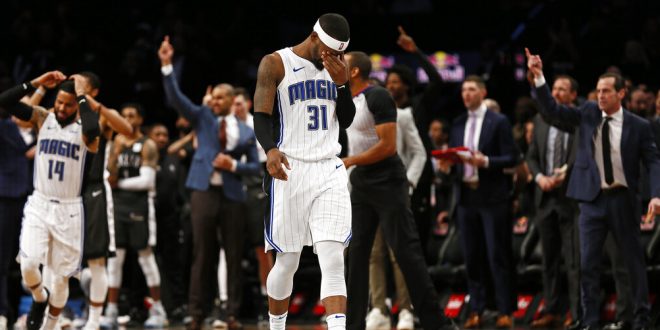 Wednesday Woes for Magic and Heat

The Orlando Magic and the Miami Heat are both falling towards the end of the pack in the Eastern Conference. In their Wednesday night matchups, the Heat and the Magic each failed to pick up wins.

The NBA season is now more than halfway over. With each of the Florida teams sitting at just under .500, they’ll certainly have to be more consistent if they want to reach the post-season.

The Magic were in New York Wednesday night to take on as Eastern Conference opponent in the Brooklyn Nets. Each quarter of the game ended in nearly the same score for both of the teams. At the half, the game was knotted up at 56. Unfortunately, though, for the Magic, they would lose their hard-fought battle by just four points. In a final score of 114-110, the close loss for the Magic certainly had to sting as they fell to 20-28.

With the win the Nets improved to 26-23 on the season and are on a five game winning streak. Nets point guard D’Angelo Russell had a double-double with 25 points and 10 rebounds in the Nets win on Wednesday.

The Magic are surely looking to bounce back on Friday night on their home court as they host the 20-26 Washington Wizards at 7 p.m. EST.

After back-to-back losses, the Heat are working their way down to the bottom half of the Eastern Conference rankings. In a non-conference game against the Los Angeles Clippers on Wednesday night, the Heat were looking to get back on track and start their trek up the conference rankings.

Headed into halftime the game was tied at 54 a piece. However, in the second half of the game Miami couldn’t do much on offense. The Clippers took one from the Heat at home and improved to 26-22. Less than eight wins separate the Heat, who now sit at No. 8 in their conference, and the three teams above them at No.’s 5, 6, and 7.

Miami will continue working their way up the ladder on Friday night when they travel to Cleveland to take on the ever-struggling 9-40 Cavaliers at 7:30 EST.