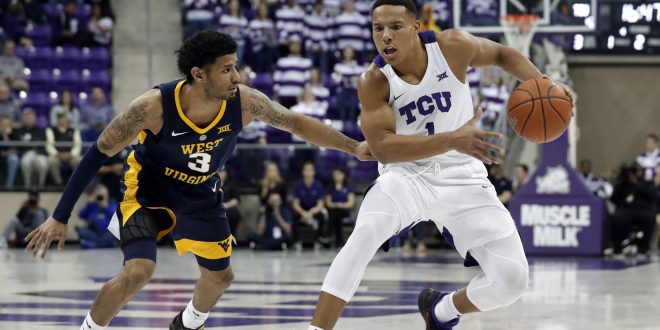 TCU Horned Frogs to Face the Florida Gators at Home

The TCU Horned Frogs are hosting the Florida Gators on Saturday in Fort Worth, Texas for the SEC-Big 12 Challenge.

Play-by-play voice Brian Estridge for TCU says this is a team that can go either way.

TCU has a strong home record, only losing once to Lipscomb back in November, 73-64.

This is a team who isn’t afraid to rebound when they can. They’ve had a total of 668 rebounds with an average 37.1 per game while the Gators are averaging 34.8.

Desmond Bane is TCU’s number one leader with 14.9 points per game. The junior guard from Indiana has had an impressive season with the Horned Frogs. His season highs have come recently from West Virginia on Jan. 15.

The forward from Australia was a redshirt freshman and only started in nine games last season. This season he’s started in 14 and is the second leader in points per game at 14.2. He’s shined recently against Oklahoma and Texas with his season highs.

Kevin is the number one leader in rebounds for TCU averaging 7.2 rebounds per game. The redshirt freshman from Barbuda just started his college career but he is proven to be a force to be reckoned with on defense. His rebound high was 13 against Texas on Jan. 13.

The Florida Gators have been on a rollercoaster winning and losing some throughout the season. They’ve won their last two games against Texas A&M and Georgia, but the two games before that fell to MS State and Tennessee.

Florida is presenting a challenge for TCU, Estridge said.

Tune into the match-up tomorrow at noon on ESPN2.

I am a fifth-year journalism major, specializing in sports and media. My favorite sport to watch and cover are college and NFL football. When I'm not doing that, I enjoy hanging out with my cat, going to concerts and traveling.
@sportsabrina
Previous Kentucky vs. Kansas Preview
Next Dan Mullen Reportedly Set to Hire Former MSU D-Line Coach David Turner