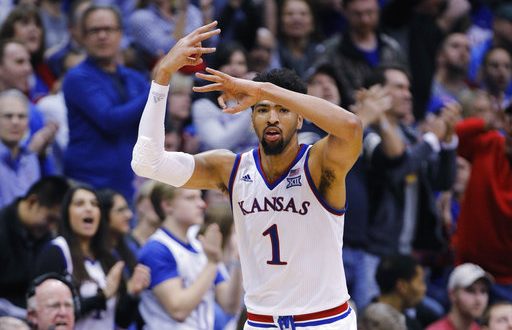 Kansas forward Dedric Lawson (1) reacts after hitting a three-point shot during the second half of an NCAA college basketball game against Texas Christian, Wednesday, Jan. 9, 2019, in Lawrence, Kan. Lawson scored 31 points in the the Jayhawks ' 77-68 win over the Horned Frogs. (AP Photo/Colin E. Braley)

Big 12 giant, No. 9 Kansas Jayhawks are coming to the Rupp Arena on Saturday to face-off against SEC giants, No. 8 Kentucky Wildcats for a battle of the colossuses.

Last weekend, No. 16 Auburn did all they could during their 82-80 home loss against Kentucky. The Wildcats led by 17 points during the second half. Auburn was able to cut the deficit to just two points before the final buzzer rang. Keldon Johnson and Tyler Herro were the top scorers for Kentucky with 20 points each.

Kansas, on the other hand, suffered a loss on the road to West Virginia last weekend by just one point. Dedric Lawson and Marcus Garret combined for 30 points, each scoring 15. LaGerald Vick also added 13 in the Jayhawks effort to win, but it was not enough.

During the week, Kansas bounced back and capitalized at home against No. 24 Iowa State 80-76. Dedric Lawson had no sympathy for the Cyclones scoring 29 points and picking up 15 rebounds.

Freshman Tyler Herro is averaging 13.7 points per game. He’s hot at the moment, scoring 20 points against Auburn and 18 against Mississippi during the week. He’s a player that links up well with Nick Richards and PJ Washington, he also rises to the occasion if those two are not having a good day.

Here are some of his most outstanding games against ranked teams this season:

Dedric Lawson has been Kansas’ powerhouse this season. Lawson is averaging 19.5 points and almost 11 rebounds. Lawson who stands at 6-9 making 74% of his free throws and shooting 53% from the floor can carry Kansas in this huge matchup this weekend.

Here are some of his most outstanding games against ranked teams this season:

Tip-off is this Saturday at 6 PM EST on ESPN.

Figuring out a plan to make it big in the soccer scene in the U.S. or anywhere else in the world. For now, I'm having a blast writing for ESPN Gainesville and learning a lot from managers and students around the workplace. I'm covering the TV beat for Gators Soccer. What a team! Follow me on twitter: @J_AguerrevereUF
@@J_AguerrevereUF
Previous Preview: Gators Head to TCU for Big Game Against Horned Frogs
Next TCU Horned Frogs to Face the Florida Gators at Home