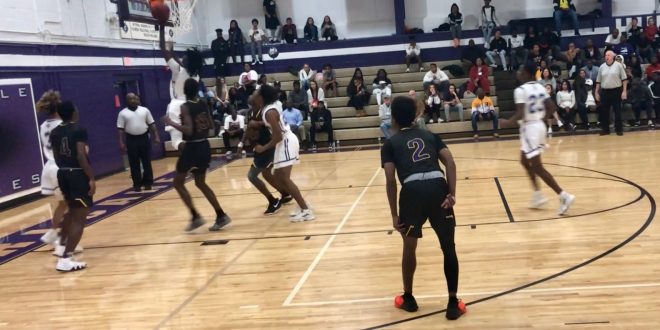 J'Len Wilson scores two of his 30 points against Columbia High on Tuesday night.

“It was a very emotional night,” Wilson said. “It’s my last night playing in the Purple Palace. It’s my last time playing in front of my family and my friends.”

The game carried extra weight for the rest of the team as well. A win would cement the team’s spot as regular season district champions.  A loss would drop Gainesville High down to third.

The last time the team faced Columbia High, the Hurricanes fell 69-38 at Columbia. Despite their previous meeting, GHS coach Kelly Beckham made sure to tell the team that this game was just like any other one.

“It’s one of those things where you wanted the kids to know that you can do it,” Beckham said. “Nothing different, just play.”

In the first quarter, both teams saw success from beyond the arc as they each notched multiple three-pointers. Columbia’s five three-pointers outmatched Gainesville’s three three-pointers though as the Tigers rode an 8-0 zero run to finish the quarter up 21-14.

The Hurricanes would not let the game slip away that quickly as they clawed back in the second quarter and entered halftime up 34-30, capped off with a buzzer-beating layup by senior guard Desmond Ridgeway.

The last second shot by the Gainesville Hurricanes gives them a 34-30 lead going into halftime. pic.twitter.com/inwyIZjPWV

Wilson was a pivotal player for Gainesville High’s first-half performance. He scored the final eight points of the half for the Hurricanes amidst a 14-point first half performance.

“Me being a senior point guard I just knew that I had to keep stepping on the gas and I couldn’t let up,” Wilson said. “That’s a real good team and I knew if I let up they’d just end up coming back.”

After halftime, Gainesville extended its lead within the first three minutes of the third quarter to make it 40-30. However, the Hurricanes would not score again until there was just over two-and-a-half minutes remaining in the quarter.  Aside from a two-and-a-half minute scoring drought, Gainesville also racked up eight fouls to Columbia’s two fouls in the quarter. This gave the Tigers a chance to cut a 10 point deficit down to five and enter the final quarter with a score of 47-42 in favor of the Hurricanes.

“We fouled a lot in the third quarter and we were just allowing those straight line drives and trying to block shots at the rim,” Beckham said.

Gainesville maintained an early lead thanks to Wilson’s continued success from the free-throw line. On back-to-back possessions, Wilson cut towards the basket, was fouled and knocked down the ensuing free throws.  As troublesome as fouls were for the Hurricanes in the third quarter, the Tigers found themselves in foul trouble in the final quarter as they finished with 12 team fouls. Three of those came with under 13 seconds remaining.

As for Gainesville, their consistency at the line in the final minute was huge as the team did not let go of their lead. Despite a pair of big three-pointers from Columbia, the clock struck zero on Gainesville’s Senior Night as the Hurricanes walked off with a 64-60 victory.

Wilson led the way with 30 points, including many in crunch time at the free throw line, something that did not go unnoticed by coach Beckham.

“I thought he played pretty well,” Beckham said. “He’s a smart player and obviously he worked hard to get to the line because he was hitting his free throws.”

The win means that the Hurricanes will be the first seed for the district tournament at Vanguard High on February 12. Before the team can continue district play again, Gainesville still will have three remaining games.  The team faces Buchholz High on Friday and then next week will have games against P.K. Yonge and Eastside to culminate their regular season.