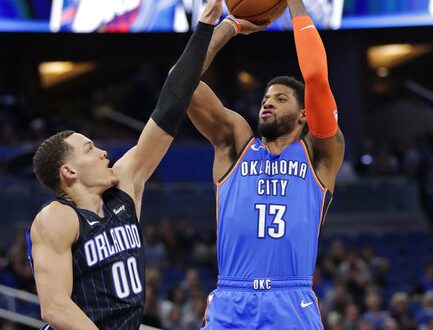 The Orlando Magic (20-31) will want no more of the Western Conference and their all-stars after Tuesday night.

Arguably the NBA’s two leading MVP candidates, James Harden and Paul George, have given the Magic and head coach Steve Clifford a venomous taste of their scoring abilities in the last few days alone.

After Harden scored 40 last Sunday to down the Magic, George fired off another 37 points in the Oklahoma City Thunder’s (32-18) 126-117 road win on Tuesday. It’s the Magic’s fourth loss in a row and their seventh in their last eight games.

Make that 6 in a row.
PG finishes w/37 pic.twitter.com/AEgkonUdbG

George sets the tone with 31-point first half

Over the last week, some around the league have said that George has shortened James Harden’s lead in the MVP race. Harden has averaged an incredible 45.1 points per game in January. It’s hard to believe that anyone is even playing on the same planet as him, but in fact, George is.

George has put up an average of 31.6 points in his last seven games. He had 31 in the first half against the Magic. Russell Westbrook also added his fourth consecutive triple-double. Westbrook finished with 23 points, 14 rebounds and 14 assists on the night as well.

While George was 11 for 16 from the field after the first half, he only managed three buckets after that. The Magic actually led this one by three points with nine minutes remaining in the fourth quarter.

From there, Westbrook and guard Dennis Schroder guided the Thunder home. Schroder scored 18 of his 21 points in the fourth quarter, and Clifford’s team effectively had no answer for that scoring trio.

Billy Donovan’s team has now won its last six games and has climbed to third place in the Western Conference. The Thunder travel to Miami to face the Heat on Friday night.

It’s their fourth loss in a row, and yes, the Magic are now spiraling downwards rather quickly after a decent start to the season. But there were some positives for Clifford to take from Tuesday’s loss.

The Magic led by three after the first quarter as Nikola Vucevic and Aaron Gordon both got off to hot starts. But Gordon would go 3 for 16 after the first quarter despite almost finished with a triple-double. Vucevic continued his all-star worthy season by collecting 27 points and 11 rebounds. Six players finished in double figures on the night, but it’s clear the Magic still lack another scoring threat.

Clifford’s team ranks in the bottom five of the league in points scored. Meanwhile, the Magic are only turning the ball over 13 times a game (fifth best in the NBA).

“We lost No.1 because (Oklahoma City) is good and played well,” he said. “But when you’re not going to run back on every single possession — which takes no talent, by the way — they’re going to make you pay and they made us pay.”

The Magic will now have to prepare for another tough test against the Indiana Pacers at home on Friday night. Tip-off is set for 7 p.m.

They’ve now slid to 11th-place in the Eastern Conference. Yet this season may be more about developing the Magic’s young stars rather than just wins and losses.

Even following their seventh loss in eight games, the performances of Vucevic, Evan Fournier and Aaron Gordon should give Clifford and Magic fans some hope going forward.