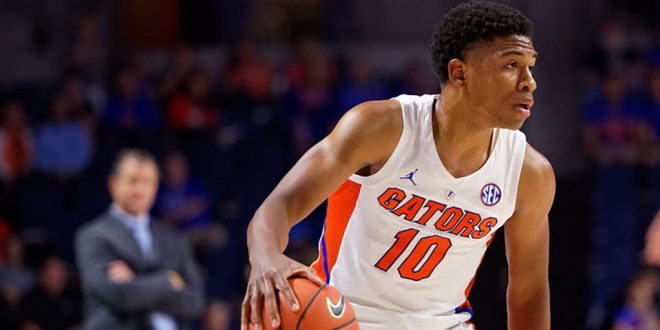 The Florida Gators and Ole Miss Rebels are looking to bounce back after disappointing performances in the SEC/Big 12 Challenge. The Gators lost by 5 points on the road to a solid TCU team, while the Rebels took a beating from the 24th ranked Iowa State Cyclones.

With a win against Ole Miss on Wednesday night, the Gators would be over .500 in conference play for the first time this season.

What to Expect From Ole Miss?

The Rebels, who are 14-5 overall, are led by Breein Tyree and Terence Davis. Tyree has taken a leap from being a solid SEC contributor as a sophomore to one of the top players in the league as a junior. The New Jersey product is averaging 17.3 points, 3.3 rebounds and 2.9 assists per game. He is also shooting an efficient 38.1% from beyond the arc and 48.9% from the field.

While Davis hasn’t taken the monumental leap that Tyree has, he is still having a fantastic year. The senior is averaging a career high 15.8 points, 5.9 rebounds, 3.5 assists and 1.5 steals per game on 40.9% from three. At 6’4″, 201 pounds, Davis is one of the strongest guards in the SEC.

While offense is their calling card, they are pretty solid on defense. They have a defensive efficiency of 97.4, which ranks 70th. The Rebels also have a steal percentage of 10.6%, which falls within the top 60. Overall, they do a nice job of slowing down the game and playing at their pace.

The Gators must use their defensive intensity to combat the offensive firepower of Ole Miss. This means forcing the ball out of the hands of Tyree and Davis and making other complimentary players beat them.

Florida needs to force turnovers to create easy buckets. So many games are decided by one or two possessions, and this is what has haunted the Gators all season long.

Excluding their season opening blowout loss to Florida State, the Gators have lost every single game by single digits. Six of their eight losses have been within 2 possessions.

Jalen Hudson has extended his free fall into oblivion. After averaging 15.5 points per game as a junior, Hudson is averaging a career low 6.2 points per game. He has scored in single digits in his past 7 games.

There have been some bright spots in such an up-and-down season for Mike White’s squad. KeVaughn Allen has regained his form from his sophomore year. The senior is averaging 17.8 points per game in conference play and has scored in double digits in 12 of his last 13 games.

All three freshman have showed out for the Gators. Noah Locke is second on the team in scoring with 11.2 points per game. He continues to showcase why he is considered the best shooter on the team, ultimately connecting on 41.8% of his attempts from beyond the arc.

Andrew Nembhard has done a fantastic job running the offense. He is averaging 5.9 assists per game, which is 5th in the SEC.

Keyontae Johnson has accepted a bigger role with the loss of Keith Stone and has showed why he is considered one of the most athletic players in all of college basketball. The intrigue with all three freshman is real, and Gators fans have to be wondering how good this team can be if all three of them stay at the collegiate level all four years.

The game will be played in Gainesville on Wednesday, January 30th at 6:30 p.m.