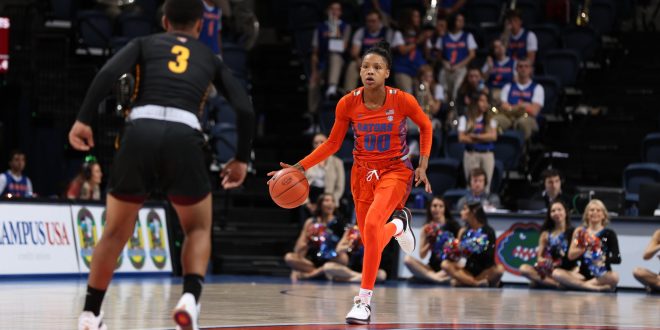 Florida Women’s Basketball Looks to Bounce Back Against Tennessee

The Florida Gators women’s basketball team has not fared well in SEC play so far this year.

UF is just 1-6 in conference games, with two of those losses (South Carolina and Mississippi State) coming by 30 points or more.

Coming off an 83-73 home loss against Arkansas on Sunday, Florida is set to begin a two-game trip away from the O’Dome.

The Gators will kick off road play on Thursday when they take on the Tennessee Lady Volunteers. Florida will follow up that game with a matchup against Kentucky on Sunday.

Similar Struggles in the SEC

Although Tennessee is 13-7 on the season, the team has faced some challenges since the new year began.

After defeating Auburn on the road to start off 2019 on the right foot, Tennessee lost five consecutive conference games. The Lady Vols snapped their losing streak this past Sunday with a victory against LSU, which put them at 2-5 against SEC competition this year.

Florida last came off the court victorious on Jan. 13 when they beat Missouri 58-56 at home. While their opponent on Thursday has had their troubles as well, Gators redshirt sophomore Danielle Rainey has respect for Tennessee’s talent:

On the season, the Lady Volunteers are averaging 77.4 points per game, 45.3 rebounds a contest and are knocking down close to 43 percent of their field goal attempts.

The Emergence of Rainey and Smith

Funda Nakkasoglu leads the Gators in scoring on the season, but Florida has also seen recent contributions from two other players.

Rainey and sophomore Kiara Smith have showcased their abilities on the offensive end this month. Both recorded their first career double-doubles against Arkansas and are each averaging nearly 10 points per game in January.

In three of the last four games, Rainey finished with at least 15 points in the box score. Head coach Cameron Newbauer talked to reporters about the TCU transfer’s recent production:

Smith attributes her elevated level of play to the mentality that the coaching staff instilled in herself and her teammates. That mindset led to her putting up 16 points against Arkansas after having just eight points combined in the previous two games.

True freshman Kristina Moore exited the Gators’ game against the Razorbacks with a sling over her left arm. Delicia Washington, on the other hand, missed that matchup after going through the concussion protocol for an injury sustained against Mississippi State.

According to Newbauer, there is no timetable set for either one of them to return.

Previous Lightning lose to the Penguins, 4-2
Next Heat lose at home to Bulls 105-89