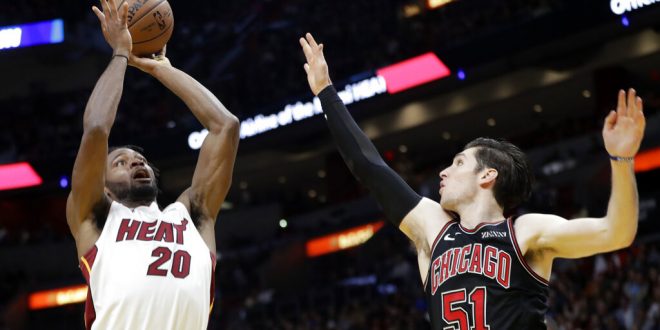 Despite being in the thick of the East playoff battle, the Miami Heat were blown out at home Wednesday night by Chicago 105-89.

The Bulls jumped out to a 31-21 lead in the first but eventually traded the lead with the Heat in the 3rd quarter. The Bulls then went on an 18-5 run to regain the lead and didn’t look back.

Chicago went on a 7-0 run to end the third quarter and held the lead the entire fourth quarter.

Bobby Portis led all scorers with 26 points, playing only 24 minutes off the bench. Robin Lopez also chipped in a double-double, scoring 14 points and grabbing 13 rebounds.

The Bulls did some damage against the Heat last night! It was a 105 – 89 win with @BPortistime scoring 26 points off the bench.@Tissot 24-second recap: pic.twitter.com/AUCbf6rKvF

For the Heat, the lack of depth on the roster showed. Miami was without Dwayne Wade and was already missing Derrick Jones and Goran Dragic.

Tyler Johnson lead the Heat in scoring with 15 points while Justice Winslow scored 14. Winslow also committed four turnovers and shot 6-17 from the field.

The Heat struggled from beyond the arc. Miami shot 12-42 from three-point range, or 29 percent.

Miami also committed 15 turnovers, resulting in 14 Bulls points. The Heat were also dominated in the paint. Chicago banged in 48 points down low, compared to only 36 for Miami.

The lose marked an end to a tumultuous January for the Heat. Despite leading the Southeast division, Miami finished the first month of 2019 with a 7-7 record.

Following the lose to Chicago, the Heat dropped its overall record to 24-25. After the loss, Miami now sits in 7th place in the Eastern conference. The team is only half a game ahead of 8th place Charlotte and three full games ahead of Washington in 9th.

The road ahead doesn’t get much easier for the reeling Heat. On Friday, Miami will host the Oklahoma City Thunder who sit at 3rd place in the West. Following that matchup, Miami hosts the 4th place Indiana Pacers and then travel to Portland to battle the Western conference’s fourth place team.

The trip to Portland begins a trip to the west coast that includes contests with first place Golden State and second place Denver.

If the Heat want to remain in the postseason conversation, the team will need to find consistency on offense and learn to adapt without two of their top players.