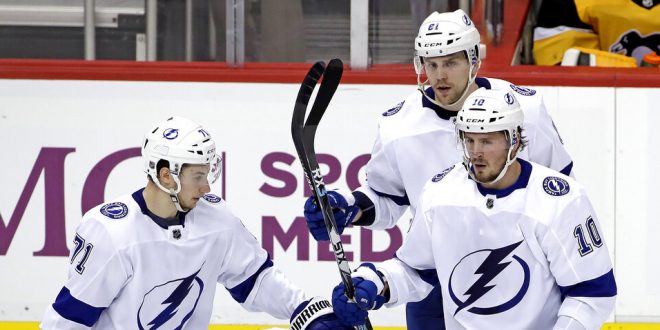 Lightning lose to the Penguins, 4-2

The Tampa Bay Lightning were in Pittsburgh Wednesday night to face off with the Penguins in an Eastern Conference matchup. The Lightning were not only battling the Penguins, but they would be fending off the polar temperatures that were no higher than 9 degrees as well. The game against the Penguins was the first game back on the ice for Tampa Bay following a 10-day break in their schedule.

The Eastern Conference leading Lightning have the best record in all of the NHL. However, they have lost three of their last six games. The Lightning have lost consecutive games just once this season and that was back in November.

The Penguins jumped out to an early 3-0 lead after just the first period. Although, it was an unexpected lead by Pittsburgh as they were outshot by the Lightning 16-5. Then, at the end of the second period it looked more likely that Pittsburgh was going to be handing Tampa Bay their first shutout loss of the season as they went up 4-0. In the third period the Bolts weren’t going down without a fight, quite literally. Steven Stamkos got wrapped up with Evgeni Malkin in the neutral zone and a fight ensued shortly after.

Even down by four with little time left, Tampa Bay put two points on the board to avoid the shutout.

No shutout for Pittsburgh, but they’ll take the 4-2 win tonight. #TBLvsPIT

In the final five minutes of the Pittsburgh loss, the Bolts seemed to find their scoring ability again. They’ll need to keep that same momentum moving into their next game Friday night at New York. It’s worth mentioning, however, that Tampa Bay played the Islanders earlier this month in New York and were embarrassed by a score of 5-1. Both the Islanders and the Bolts lost their last games and will be looking to pick up a win and turn things around in the Friday night match.

The Lightning will be back in action and looking for redemption Friday night in New York at 7 p.m. as they face the New York Islanders and try to avoid back-to-back losses.

Previous No. 2 Gators Gymnastics enters road test against No. 1 Oklahoma
Next Florida Women’s Basketball Looks to Bounce Back Against Tennessee