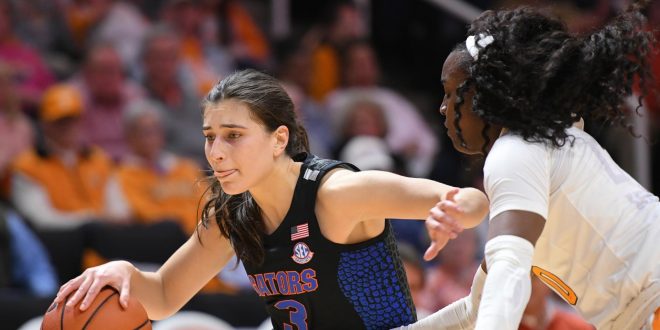 A constant theme for the Gators women’s basketball team this season has been their inability to win away from home.

On Thursday night, head coach Cameron Newbauer’s group once again could not come out victorious on the road. After losing 67-50 against the Tennessee Lady Volunteers, Florida is now 0-9 in games played on their opponent’s home court.

UF saw notable contributions from Funda Nakkasoglu and Kiara Smith, but were unable to overcome a slow start to the game.

Funda Nakkasoglu scores 18 and the Gators commit a season-low eight turnovers but come up short at Tennessee. pic.twitter.com/lr8L77LrAl

Rough end to the first quarter

The final five minutes of the first period gave Tennessee a comfortable cushion over Florida.

During this stretch, the Lady Vols went on a 15-4 run and closed out the quarter with a 24-8 lead. Overall, the team knocked down all three of their shots from behind the arc and made just over 50 percent of their field goal attempts.

On the other hand, the Gators seemingly couldn’t buy a basket in this frame. Funda Nakkasoglu had six points, but Florida connected on just 28.6 percent of their shots and made no triples.

After the game concluded, Newbauer highlighted Tennessee’s efficiency from deep in the quarter:

“Out of the gate, they (Tennessee) did a good job of really jumping on us. They average about three 3-pointers a game, and they hit three within the first five minutes. Once we settled down, I really liked how we competed in that first quarter.”

With the first quarter in the books, #Gators women’s hoops trails the Lady Vols 24-8.

Nakkasoglu connected on three of her four shots and Robinson got a layup to go, but that has been it for Florida’s scoring tonight.

All 5 starters have scored for Tennessee. @ESPNGainesville

Unwilling to back down

The Gators bounced back in the second quarter, outscoring the Lady Vols 19-15 and allowing no three-pointers. On the offensive end, Smith and Ariel Johnson led the way for Florida.

Smith, a sophomore guard, got a layup to go and knocked down a three-pointer to give her five points before halftime. Johnson had six points in the quarter as the true freshman connected on two shots from behind the arc.

Although Florida ended up taking eight more shots in the second half than they did in the first half, they managed to score just 23 points. Overall, the Gators went 9 of 37 from the field in the third and fourth quarters and connected on just 3 of their 13 three-point attempts.

With Tennessee struggling as well during this time, Florida was only outscored 28-23 in the final 20 minutes of play. A bright spot for the team was that Nakkasoglu, who finished with 18 points, responded well after having a hard time finding her shot in the second quarter, when she missed all four of her attempts.

“I think it is just that some days they go in and some days they do not,” Nakkasoglu said of her performance. “At the beginning, they were not going in, but I have the confidence in my teammates and coaches to keep me going.”

Delicia Washington, who missed Sunday’s game against Arkansas with an injury, went 0 of 5 from the field off the bench.

What’s next for UF?

Thursday’s game against the Lady Vols marked the first of a two-game road trip for the Gators. Florida will be on the road at Kentucky on Sunday to take on the Wildcats, with tip-off set for 2 p.m.

The team will be back at the O’Dome next Thursday to host Alabama. In their last meeting, the Gators fell to the Crimson Tide 74-67 on the road.