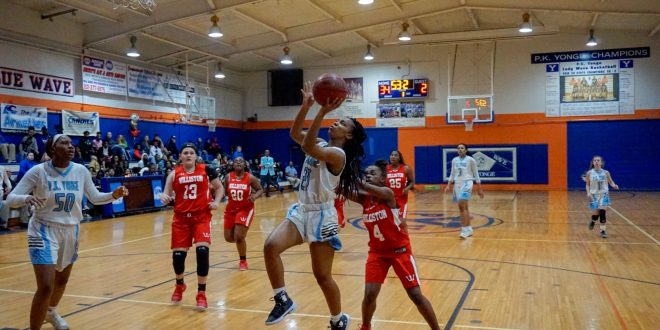 The PK Yonge Blue Wave went head to head with the Williston Red Devils in a girl’s varsity basketball game on Thursday with the Blue Wave coming out on top 81-31. The Blue Wave girls kept a big lead throughout the whole game with an excellent performance on the court in both defense and offense.

Here with @DastgerdiSara at @pkyongedrs Gymnasium watching the Girls Varsity Basketball Team tplaying against Williston High School. The first quarter just ended and the Blue Wave has an incredible lead of 40-4 @ESPNGainesville pic.twitter.com/XeT0PEKpAz

As the second quarter kicked off,  shooting guard Jaden Robinson carried her team scoring seven points, while Sydney English scored both of her free throws. The Blue Wave were up 42 at halftime.

Senior power forward Raquel Cassidy scored eight points in the third quarter, while Natalyah Sampson got six and both her free throws.

With the PK Yonge girls up with a score of 74-26 at the close of the third quarter,  Jaden Robinson hit another three-pointer, while Sydney English and Mya McGraw both scored two points. This kept the team ahead for the final score of 81-31.

This win was definitely the product of great teamwork with everyone on the court scoring consistently. Courtney Moore led her team today with 16 points, with Raquel Cassidy and Jaden Robinson scoring 14 and 11 points as well.