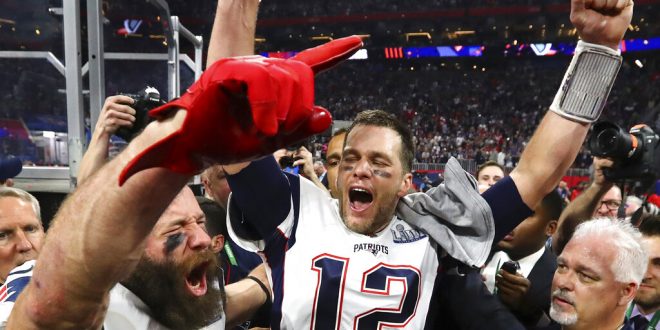 A phrase that became a rallying cry and a slogan for the team from Foxborough, “Still Here” became the reality Sunday night in Atlanta.

The Patriots defeated the Los Angeles Rams 13-3 to win Super Bowl LIII. The win captures the sixth title in New England’s history, all in the Brady/Belichick era.

This one might’ve been the most surprising since the first time they beat the Rams.

A sluggish start to the season, blowout losses to teams like the Lions and Titans, the loss of Josh Gordon, a defense that was lackluster for the first three quarters of the season, and a perceived decline in Tom Brady’s play all made it seem like this wouldn’t be the Patriots year.

When New England started to pick things up after two wins to close the regular season, Brady released the “Still Here” slogan on his Instagram as a message to those who were doubting him.

After the win against the Rams, it was Belichick’s turn to say that to the doubters.

Much like the season itself, the fate of the game seem to hang in the balance forever as well. But as has been shown throughout their dynasty, the Patriots didn’t flinch. In what’s a testament to their run, they continued to find new ways to win.

The Patriots had never won a Super Bowl in which they scored fewer than 20 points. They scored 20 in Super Bowl XXXVI to beat the Rams the first time, and won three out of four built on a defense with multiple future hall of famers.

From there, as Brady evolved into a future hall of famer himself, the team was tailored around him with a complimentary defense, winning two more in that fashion, against the Seahawks and Falcons, scoring 28 and 34 points respectively.

In true throwback fashion, 17 years to the day since they first beat the Rams and stymied a great offense, the Patriots reverted to their defensive ways.

The Rams didn’t have a single snap in the red zone, and after averaging 33 points per game during the season, scored only via a Greg Zuerlein field goal in the third quarter.

Basically, with the help of defensive coordinator Brian Flores, Belichick dialed up another defensive masterclass. After playing mostly man coverage for most of the year, he played mostly zone against Los Angeles. The plan was to play with some beef up front, contain Todd Gurley and the run game, and make Jared Goff beat them with his arm.

The plan worked to a T.

The Rams ran for only 62 yards and their offense never got in a flow.

Goff looked uncomfortable all game, as the Patriots’ defense sacked him four times. Goff only completed 19-of-38 passes for 229 yards, threw a pick and no touchdowns. The pick came at a crucial time, with Los Angeles driving late to tie the game. New England sent an all-out blitz, and the underthrown ball was picked by All-Pro cornerback Stephon Gilmore.

The Patriots defense kept them at bay long enough for Brady to do what he always does: lead a fourth quarter game winning drive.

The drive, capped with a Sony Michel rushing touchdown with 7 minutes left, was Brady’s sixth career game-winning drive in a Super Bowl. In a game in which the only offense ran through Super Bowl MVP Julian Edelman (10 catches, 141 yards), it finally got going for real when the stakes were highest.

Six Super Bowl wins, six game-winning drives. Despite an overall uninspiring performance (21-for-35, 262 yards, INT), Brady came up big when his team needed him most, going 4-for-4 on the final drive.

That’s why, even though things hung in the balance in the season and in the game, Brady and Belichick still gave the Patriots the edge. And that’s been the story of their dynasty.

So in a season of high flying offenses, exciting young coaches and quarterbacks, its the old guard that reigns for another year.

“This was the most satisfying year I’ve ever been a part of,” Patriots tight end Rob Gronkowski said. “How we came together, the obstacles we had to overcome, you know, the grind, from the beginning of training camp to now, and we stuck together, and that’s what it’s all about.

“And it’s sticking together, and that’s what we did, we stuck together and we grinded, and it was just unbelievable, and now we’re Super Bowl champs, we’re world champions.”

In other words, the Patriots are still here.

Native New Englander. Follow me on Twitter: @jonacosta_10
@jonacosta_10
Previous Sean McVay and The LA Rams Can Learn From Their Loss To The Patriots
Next Tony Gonzalez, Ed Reed highlight 2019 Hall of Fame class