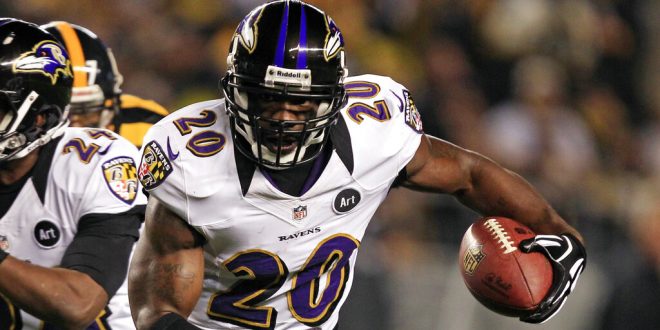 FILE - In this Nov. 18, 2012 file photo, Baltimore Ravens free safety Ed Reed (20) runs after recovering a fumble by Pittsburgh Steelers wide receiver Mike Wallace during the first quarter of an NFL football game in Pittsburgh. In the last decade, four defensive backs from the modern era have made the Pro Football Hall of Fame. On Saturday, five of them are up for consideration. Cornerback Champ Bailey and safety Ed Reed are in their first year of eligibility. Cornerback Ty Law and safeties John Lynch and Steve Atwater each have been this route before and fallen short. (AP Photo/Gene J. Puskar, File)

At the close of every season, the Hall of Fame grows bigger each time with the induction of new members. This year, football fans have the pleasure of seeing six players and two executives get their names enshrined in Canton.

After racking up over 15,000 receiving yards, 111 touchdowns and over 1,300 receptions throughout his 17-year career, Gonzalez is arguably the greatest tight end in NFL history. The 1997 first-round pick was selected to 14 Pro Bowls and was an All-Pro selection six times.

Gonzalez was often a matchup nightmare for his opponents over his 12 seasons with the Kansas City Chiefs and five with the Atlanta Falcons. He was often a model of consistency on and off the field and changed the importance of the tight end position.

Gonzalez ranks only behind Jerry Rice on the all-time receptions list, sixth in receiving yards and eighth in touchdown receptions.

The tight end position would never be the same.

Congratulations on being elected into the Pro Football Hall of Fame, @TonyGonzalez88! pic.twitter.com/lH9D2bZ3dR

Ed Reed would put fear into the eyes of opposing quarterbacks every time they thew into his secondary. The free safety was a nine-time pro bowler and five time All Pro selection en route to his Hall of Fame career.

Reed was a first round pick in 2002 and he and Ray Lewis would anchor the Ravens defense for years to come. His selection as 2004 Defensive Player of the Year made him only one of five safeties in league history to receive the honor.

He led the league in interceptions three different seasons, totaling 64 throughout his career putting him seventh on the all-time list. He is perhaps one of the greatest play makers the league has seen on this side of the ball and was also a Super Bowl Champion.

Number one receivers would dread the day they faced the Broncos. That’s because they would be lined up opposite of Champ Bailey. He had a 15-year career highlighted by physical play and making quarterbacks wish they didn’t throw to his side of the field.

Bailey has a four-time pro bowler in his first five years with the Washington Redskins before elevating his game with the Denver Broncos. As a member of the Broncos, Bailey would be selected to another eight Pro Bowls and was a three-time All-Pro Selection while leading the league in interceptions in 2006.

Bailey would appear in 11 playoff games throughout his career and reached Super Bowl XLVIII with the Broncos in his last season. He was one of the best shut down corners of his era.

It's starting to become a little more real.@champbailey's getting measured for his @ProFootballHOF gold jacket and bust! pic.twitter.com/DPNJL98W3X

Former New England Patriots defensive back Ty Law is one of the best defenders to ever where the uniform. Law was a five-time pro bowler and two-time All-Pro selection during his 15-year career. This was his third stint on the Hall of Fame ballot.

During his 10 seasons with the Patriots, Law appeared in four different Super Bowls winning three of them. In 1998, he led the league with nine interceptions and is eleventh all-time in pick-sixes.

Law’s top highlight came in Super Bowl XXXVI against the Rams with his pick-six that helped secure a 20-17 win. His entry into Canton may top that moment.

"Getting the knock was the best feeling in the world."

The rest of the class

Finishing off this year’s Hall of Fame class center Kevin Mawae, safety Johnny Robinson and executives Pat Bowlen and Gil Brandt. Mawae was an eight-time Pro Bowl selection and three-time All Pro throughout his 16-year career with the Seahawks, Jets and Titans. He is arguable one of the best centers in league and started 112 consecutive games between 1998 and 2004. He was also selected to the All-2000s team.

Johnny Robinson was a seven-time Pro-Bowl and six-time All-Pro selection throughout his 12-year career with the Dallas Texans/Chiefs. Robinson was a three-time AFL Champion and one-time Super Bowl winner. He led the league in interceptions with 10 in 1966 and 1970.

Denver Broncos owner Pat Bowlen was elected over the weekend after overseeing a widely successful franchise. Since purchasing the team in 1984, the Broncos went to the playoff 18 times. In those trips, they’ve reached seven different Super Bowls and won the big game three times. Throughout his tenure, he has brought in Hall of Fame talent John Elway, Terrell Davis, Shannon Sharpe and Champ Bailey.