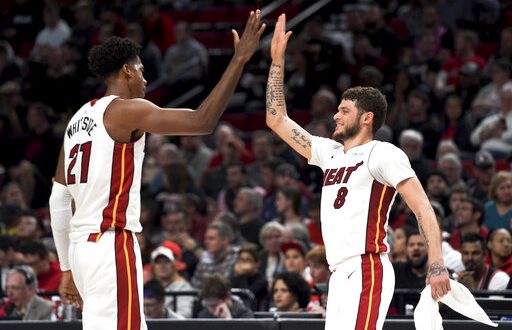 Miami Heat center Hassan Whiteside, left, is greeted by guard Tyler Johnson, right, as he heads to the bench after hitting a free throw late in the second half of an NBA basketball game against the Portland Trail Blazers in Portland, Ore., Tuesday, Feb. 5, 2019. The Heat won 118-108. (AP Photo/Steve Dykes)

It seems like the Miami Heat struggle to find any real rhythm this season. On some nights, it’s tough for any player on Eric Spoelstra’s roster to provide consistent offense for Miami.

On Tuesday night it was a different story. Hassan Whiteside logged his third straight double-double with 28 points and Dwyane Wade added 22 points to give the Heat a 118-108 road win in Portland.

Miami continues to linger in the area of playoff spot, but a loss on Tuesday would’ve marked their fourth in a row. Losses to Chicago, Oklahoma City and Indiana had put the Heat three games under the .500 mark before Tuesday.

It doesn’t get much easier for the Heat as they’ll continue their West-coast tour on Friday in Sacramento. Then they’ll travel to the top two seeded teams in the conference (Golden State and Denver) next week.

Wade continues to be this Heat team’s leader, but the 37-year-old veteran has been relinquished to a bench role at this stage in his career. Miami can sometimes lack scoring options when their perimeters shots aren’t falling. It’s part of the reason why they’re ranked 26th in the league in scoring.

Whiteside scored the first two buckets for the Heat of the game, and the Trail Blazers truly had no answer for him down low. Whiteside finished 11 for 12 from the field. He and Wade also combined for 12 points in the fourth quarter that helped close the door on Portland.

Five players were in double figures for the Heat, but their depth hasn’t been a huge issue this season. They’ve simply lacked someone that can carry them through struggling offensive periods in their losses.

More dominantly efficient games from Whiteside like Tuesday’s should help the Heat’s playoff cause.

The Heat were in large part helped by the Trail Blazers’ own inability to put the ball through the basket. Guard Damian Lillard, who is averaging 26 points per game, shot just 2 of 10 from 3-point range.

CJ McCollum had 33 points but wasn’t helped by Portland’s usual main man. The Heat’s perimeter defenders did a solid job of contesting Lillard’s shot, and Whiteside was also a constant nuisance in the paint.

Portland hadn’t played since last Wednesday’s win against Utah. Head coach Terry Stotts wondered after the game if that might’ve played a role in his team’s performance.

“For whatever reason, we didn’t seem to have a lot of pop for most of the game, he said. “I don’t know if it was the five days off or what, but it seemed pretty obvious most of the three quarters, we just didn’t make the energy plays, whether it was in transition or defensively.”

The stat sheet showed Stotts might be right. His team was out-rebounded 54 to 42, and Portland only got to the free-throw line 12 times. Miami hit 21 of their 25 free throws.

The Heat were able to follow their 0-3 home stand with an impressive win against the fourth best team in the West. Miami also continues to be a better team on the road. They’re now 14-11 away from home and just 11-16 at the American Airlines Arena.

Consistency is what Spoelstra will need most from his team as they approach a tough stretch of games on the West coast.

Sports media and management student at the University of Florida. Content creator for ESPN 98.1 FM/ 850 AM WRUF.
@TheEdgarChavero
Previous Eastside Rams Stomp On Eustis Panthers
Next Lightning Lose In Shootout to Knights