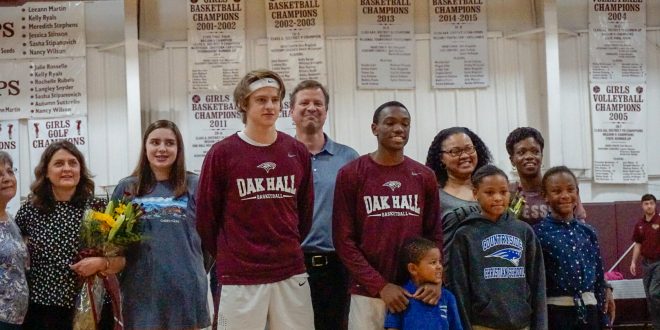 The Oak Hall Eagles defeated the Aucilla Christian Warriors in what was their last home game and senior night, 67-55.

Junior guard Rocky Dibernardo led all scorers with 24 points, including five from beyond the arc. Oak Hall’s Michael Holloway II also recorded three steals to close out his career as an Eagle.

“Well they were finding him (Rocky Dibernardo). I think the kids on the floor sensed it. He (Rocky) was on his game and making his shots. We play unselfish, it’s not something we necessarily draw up, we just play that way.” – Coach Towe

With it being senior night, Coach Towe was able to give insight into how his graduating player impacts his team.

“Mike Holloway II has as big an impact on our team as any single player has on their team in Gainesville. He just rebounds, steals, scores, defends.” – Coach Towe

“Lance is a kid that moved (here) in the middle of last year and he’s really had a good senior year. He’s had some big moments for us rebounding. He’s undersized for the position he’s playing but he’s done a great job too.” -Coach Towe

A tale of two quarters

Free throw woes haunt @OakHallSchool MBB early in this one, trailing Aucilla Christian 15-6 at the end of the 1st. @ESPNGainesville.

Aucilla Christian came ready to score, whereas Oak Hall scored only one field goal in the first quarter. Offensive boards, combined with Oak Hall starting the game 3-8 on free throws led to a less than stellar start for the Eagles.

The Warriors won on every end of the floor, with one offensive sequence involving four consecutive offensive rebounds for #33 Brandon Bates. Aucilla Christian’s Will Sullivan even ended the first quarter on a buzzer beater, which could have been the proverbial nail in the coffin for the Eagles.

Getting back on track

Oak Hall would rapidly turn this narrative around, going on a 16-2 run on behind Rocky Dibernardo’s three 3pt shots. Also instrumental in the quick turnaround was senior Lance McMahon, who dominated the second-quarter rebounds.

Coach Towe credits his two seniors and their leadership on defense for the 16-2 run, commenting:

“During that spurt they were both instrumental defensively and making some good plays. We just got better defensively.” – Coach Towe

Coach Towe also attributes much of the turnaround to the switch from zone defense to a man-to-man scheme.

The Eagles would take their first lead of the game with 4:30 left in the second off of a Micheal Holloway II steal and finish. Holloway’s defense played a key role in turning this game around fast, creating opportunities for his teammates to score.

The Eagles would continue to dominate for the last two quarters, never relinquishing the lead they reclaimed in the second quarter. By the last quarter, Rocky Dibernardo had 5 threes, and the game was slipping away from the Warriors.

With about three minutes left in the game, Aucilla Christian head coach Daniel Nennstiel called a timeout to tell his team to intentionally foul. The logic behind this decision revolved around Oak Hall’s poor free throw shooting throughout the game.

Throughout the entire game, Oak Hall shot 48% (15 of 31) from the free throw line. So statistically speaking if Aucilla could score on every possession, then they could close the 14 point deficit.

This would not turn out to be the case, as Micheal Holloway II was able to find open lanes in transition to dish to teammates to close out the game. #22 Ben Moraski helped to close the game out, making 5/6 of his free throws to spoil the comeback.

Oak Hall finishes the season at .500 and will advance to play an away game in the regional playoffs later next week. The opponent and location are to be determined.

Steven Walker is a beat writer for ESPN Gainesville and is currently studying Journalism & Sports Media at the University of Florida.
@swalker_7
Previous No. 5 Florida Gators Shutout Redbirds in Season Opener
Next P.K. Yonge Defeats Oak Hall for 4A District 1 Girls Basketball Championship