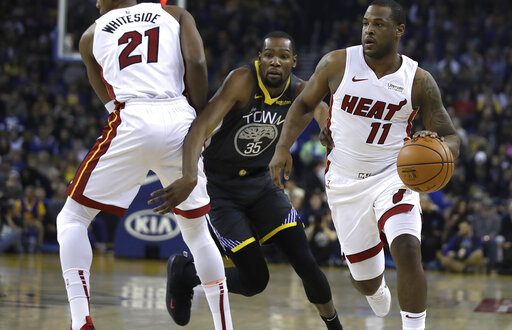 The Miami Heat put together one of their best performances of the season. Yet, it still wasn’t enough to beat the Golden State Warriors.

Josh Richardson had one of the best games of his career with 37 points but Miami took a 120-118 defeat in the Bay Area. The Heat did not have an answer for Warriors superstar Kevin Durant who went off for 39 points on 16-for-24 shooting.

Gave The Champs Their Best Shot

Miami came into Sunday night having lost four out of their last five. However, it didn’t stop them from giving Golden State everything they could handle.

The Heat got a 19-point lead in the first quarter but that lead would be cut to five at the halftime break. Miami was outscored 36-23 in the third quarter and found themselves down eight points in the fourth quarter.

The Heat rallied and actually found themselves ahead 118-115 with 51 seconds remaining.

As part of his 39-point performance, Durant hit a clutch three-pointer. Big man Demarcus Cousins then hit a pair of free throws to give the Warriors a two-point lead. Dion Waiters tried to steal the game late with a fadeaway three over Durant as time expired, but the shot didn’t fall and gave Golden State their 40th win of the season.

Down the stretch, it seemed as if Kevin Durant may have double-dribbled on the play that resulted in Cousins getting fouled and ultimately making the go-ahead free throws.

Heat head coach Erik Spoelstra said after the game that it’s unfortunate that his team got the short end of the stick but wouldn’t put the loss on the officiating.

Spoelstra, via Fox Sports Sun, said everybody saw Durant double dribble late. Points out Warriors 26 free throws to Heat's 8. Says he is allowed to say this and NBA should not fine him.

Miami was in the position to win the game because of Josh Richardson but the Bay Area turned into Waiters Island on Sunday night.

The former fourth overall pick scored 24 points on 9-for-19 shooting. Waiters was deadly from the three-point line as he made 6 of his 13 attempts. Dwyane Wade also added 10 points.

The Warriors, on the other hand, got their production from their all-stars.

Besides their team-high 39 points from Durant, Klay Thompson scored 29 points on 11-for-21 shooting. Steph Curry got in the action as well as he scored 25 points on a 9-for-18 shooting night.

Head Coach Steve Kerr said after the game that he wasn’t surprised by the big performances from his all-star game bound players.

It doesn’t get better for them either as they have no time to rest before facing the 2nd best team in the West in the Denver Nuggets tonight at 9 pm.