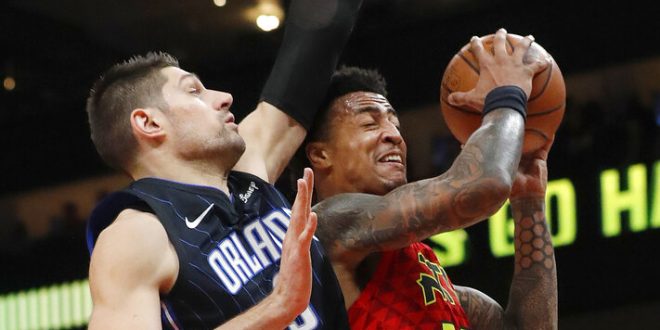 Atlanta Hawks forward John Collins (20) goes up for a basket as Orlando Magic center Nikola Vucevic (9) defends during the first half of an NBA basketball game Sunday, Feb. 10, 2019, in Atlanta. (AP Photo/John Bazemore)

The Orlando Magic Are Officially On A Winning Streak

The Orlando Magic are reeling off their third-straight win as they continue to push for a playoff spot.

Despite arriving in Atlanta at 3 a.m., after a 20-point victory at Milwaukee the previous night, they recorded their third straight victory against the Atlanta Hawks on Sunday night.

Nikola Vucevic, who will be making his first All-Star Game appearance next weekend in Charlotte, scored 19 points.

After that, Vucevic also had 12 rebounds to lead the Magic to a 124-108 victory over the Atlanta Hawks on Sunday night.

Besides being the No.6 pick in the 2017 NBA Draft, second-year forward Jonathan Issac continues to show signs of becoming an all-around player.

In addition, he put on a defensive show as he ended with seven combined steals and blocks.

Thus, Isaac capped off the win by finishing with 17 points, five blocks and three rebounds, with two steals in the first 28 minutes.

In fact, he was 6-for-9 from the floor and also added three boards with a steal on the night.

Although Markelle Fultz was acquired in a trade last week, his return does not appear to be imminent, leaving Augustin as the primary point guard.

The Orlando Magic look up to wrap their five-night, three-game road trip on Tuesday night.

The Magic will face off the New Orleans Pelicans at 8 p.m., in New Orleans.