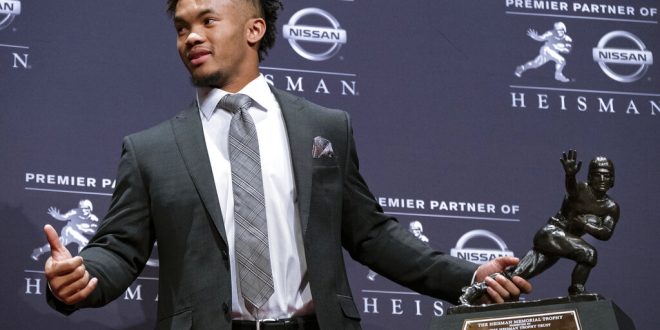 FILE - In this Dec. 8, 2018, file photo, Oklahoma quarterback Kyler Murray holds the Hesiman Trophy after winning the award in New York. Murray's locker remained empty on Monday, Feb. 11, 2019, in the spring training clubhouse of the Oakland Athletics, who say they are uncertain when or if the Heisman Trophy winner will report to the baseball team he signed with last summer. Billy Beane, Oakland’s executive vice president of baseball operation, said talks are continuing with Murray, who may drop baseball to pursue an NFL career. (AP Photo/Craig Ruttle, File)

The will-he-or-won’t-he saga surrounding Kyler Murray is now over. The reigning Heisman Trophy winner will pursue a career in the National Football League.

Last year, the Oakland Athletics drafted Murray with the number nine overall pick. However, the quarterback remained at Oklahoma to test the waters of college football. He ended up leading the Sooners to a 12-2 record and an appearance in the College Football Playoff.

Kyler Murray: Before the Heisman Season

The two-sport athlete originally committed to play football at Texas A&M. But, he transferred to Oklahoma after his freshman season.

In 2017, Murray played backup to former Heisman winner Baker Mayfield. He only got the opportunity to throw 21 passes that season. However, he completed 18 of them for 359 yards (85.7 comp. pct.) and three touchdowns.  In the spring, he took the diamond as a center fielder, kicking off what could have been an MLB career. Murray’s batting average was .296 with 10 home runs, 47 RBI, and 10 stolen bases.

Shortly after, he became the ninth overall pick in the 2018 MLB Draft, receiving a $4.66M signing bonus. At the time, he said he would report to spring training in 2019.

After earning Oklahoma’s starting QB job at the start of the 2018 season, Murray became a superstar. He threw for more than 4,000 yards and 42 touchdowns, compared to just seven interceptions.  Murray’s dual-threat abilities allowed him to also rush for more than 1,000 yards, adding 12 TDs in the process.

In the end, he beat out Heisman favorite and Alabama starter Tua Tagovailoa to win the Heisman Trophy. Murray received 517 first-place votes with Tagovailoa only taking 299.

After Murray’s phenomenal football season, many wondered whether or not he would actually arrive at spring training.

The two-sport athlete waited until the NFL Draft declaration deadline to post on Twitter that he had in fact declared. But, there was still speculation regarding whether or not he would attend the NFL Combine or still hold out for Oakland.

Yesterday, the decision became crystal-clear. Murray posted via Twitter that he is “fully and firmly committing [his] life to becoming an NFL quarterback.”

Murray is projected as a first-round pick on the majority of draft boards, including those of Mel Kiper and Todd McShay. However, his slight 5’10,” 190 pound frame is reportedly one of the biggest concerns for teams moving forward.

The Big 12, Oklahoma’s conference, is not exactly known for its bruising defense. And in the age of the 6’5″ quarterback, Murray’s size can be puzzling. However, his athleticism and ability to make plays are being praised left and right.

Where does this leave Oakland? David Forst, General Manager of the Athletics, says A’s brass still does not regret the pick.

Kyler Murray is set to attend the NFL Scouting Combine in Indianapolis on February 26th.

In what may have been the most anticipated division series in recent memory, the Los …