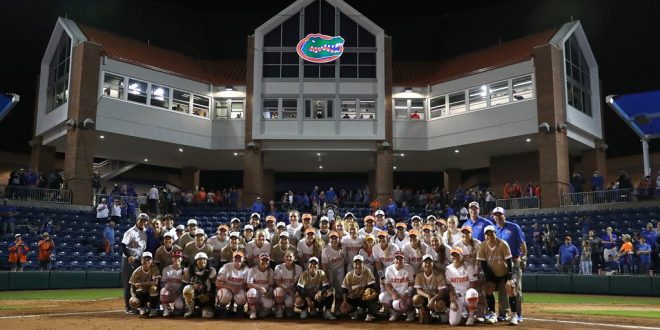 Florida Softball opened up in its new digs Tuesday, but couldn’t christen it with a win on opening night.

The fourth-ranked Gators suffered an 8-0 shutout in an exhibition game against the Japanese women’s national softball team.

It was a rare opportunity for Florida coach Tim Walton’s team to face a squad of Japan’s caliber.

Gators In Their New Home

Pitcher Kelly Barnhill said the team received a quick tour of Florida’s locker room, team room and even media room before the game.

First baseman Amanda Lorenz expressed nothing but gratitude for the renovations to Florida’s home field and the support shown by the fans. She said it was just fun to finally be out there playing for the Gator Nation and a few softball alums in the crowd.

Barnhill on seeing the new KSP:

Walton called opening night a “good experience.” He credited the team for doing a good job of taking it all in and embracing the project’s nuances. For him, it was a little different.

Walton on being in the new digs:

Playing Against the Best

This was the first time the Gators have faced an international team and Japan showed why it’s ranked second in the world according to the World Baseball Softball Confederation.

It held Florida to 2-for-21 at the plate (.100 average) and struck out seven Florida batters. Japan hit .428 against the Gators staff and scored eight runs on twelve hits including three doubles and a home run.

Lorenz on the opportunity to play Japan:

But, the Gators didn’t enter the game just to play Japan. They wanted to beat this team. Lorenz said the players expected more of themselves to play better than how they did.

“We don’t ever come out here to get a loss,” Walton said.

Lorenz on the humbling experience:

Walton, Lorenz and Barnhill still recognized the level of talent the team faced despite wanting to come out and win.

A definite example of that talent was Yamato Fujita. She performed at the plate and in the circle:

An Opportunity to Learn

Both Barnhill and Lorenz echoed that the team learned about itself through playing Japan.

Barnhill said she could improve pitching with two strikes. She explained that even though she hit spots location-wise the Japanese players were still able to make contact.

Walton on improving at the plate:

Florida was able to get experience for some of its young pitchers against Japan. Barnhill started and went three innings with Natalie Lugo, Elizabeth Hightower and Danni Farley appearing in relief.

They didn’t fare so well as they combined to allow seven of Japan’s eight runs.

Barnhill on the importance of getting everyone involved:

The Gators will be back in Katie Seashole Pressly Stadium for a midweek matchup against the University of North Florida at 6 p.m. After that, they will be competing in Tempe, Arizona in the Littlewood Classic. Wednesday’s game can be streamed on SEC Network+