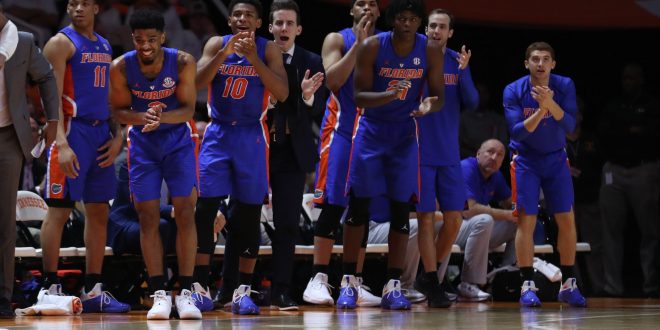 The Florida Gators are looking to end their three game losing streak as they host the Vanderbilt Commodores on Wednesday night. The Commodores are currently 0-10 in SEC play.

What to Expect From Vanderbilt?

Vanderbilt has really struggled to cope with the loss of starting point guard Darius Garland. The former five star recruit tore his ACL in the 5th game of the season. In his first 4 games, the freshman averaged 19.8 points and 3.3 assists per game on 53.7% from the field and an extremely efficient 47.8% from three.

Without Garland, the Commodores have been forced to rely on Saben Lee, Simisola Shittu and Aaron Nesmith. Lee, who has taken over point guard duties, is averaging 13.9 points, 3.9 assists and 3.5 rebounds per game. Shittu (12.0 points, 7.0 rebounds) and Nesmith (10.3 points, 5.5 rebounds) have controlled the interior for the Commodores.

Bryce Drews’ squad does not do anything particularly well. They rank outside of the top 125 in offensive and defensive efficiency.

Offensively, they are outside of the top 200 in three-point percentage (33.8%), free-throw percentage (68.1%) and turnover percentage (19.1%). The Commodores are a very poor offensive rebounding team. They grab 9.7 offensive boards per game, which ranks last in the SEC.

They also only average 12.3 assists per game, which is second to last in the SEC, only ahead of Missouri. This lack of ball movement is attributed to not having their playmaking point guard.

The Commodores aren’t any better defensively. They are one of the worst teams in the country in forcing turnovers. Vanderbilt has a defensive turnover percentage of 16.3% and a steal percentage of 6.6%, both of which rank in the bottom 50 in the nation.

They are decent at protecting the paint. However, when you play in the SEC and are forced to go up against the likes of PJ Washington, Reid Travis, Grant Williams, Chris Silva and other dominant big men, it’s difficult to consistently rely on interior defense.

What Florida Must Do

The Gators must control the pace of the game and not turn the ball over. With Vanderbilt being extremely ineffective at forcing turnovers, the Gators can’t give up many free possessions and easy opportunities. Mike Whites’ squad averages only 12.0 turnovers per game, which is the second best mark in the SEC, only behind No. 1 Tennessee.

Florida also must force the Commodores into long possessions and tough shots. With no true playmaker, Vanderbilt struggles to create uncontested opportunities.

Offensively, it’s been the same story all year. If KeVaughn Allen and Noah Locke can consistently knock down their shots, it open up easy looks for the entire team. However, when they’re off, the team struggles to put the ball in the basket.

The Gators shouldn’t have any issues handling the winless Commodores, but as we’ve seen time and time again, anything is possible in the SEC.

The Gators are looking to grab their first victory in February as they host the Commodores at 9:00 p.m. on Wednesday night. The game is set to be aired on ESPNU and can be heard on ESPN 98.1 FM, 850 AM WRUF.