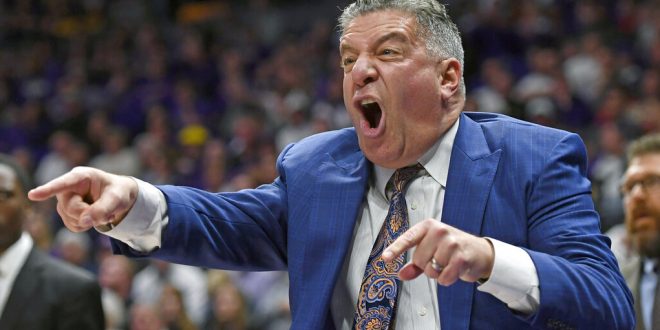 Auburn head coach Bruce Pearl reacts to a call on one of his players in the first half of an NCAA college basketball game against LSU, Saturday, Feb. 9, 2019, in Baton Rouge, La. (AP Photo/Bill Feig)

The last time Ole Miss and Auburn squared off this season, the Rebels dominated. While Terence Davis dropped 27 points on the offensive end, his team was just as dominant on the defensive end. They stole the ball 11 times, breaking down the Tigers’ offense. Ole Miss won the matchup 82-67.

But that was on the Rebels’ home court. And that game was over a month ago.

Tonight, Auburn has the chance for revenge when they host Ole Miss. With both teams trying to make a case for March, this game will be critical.

For Auburn (16-7, 5-5 SEC) this game is an opportunity – an opportunity to make a case for themselves. The Tigers have won three of their last four, and will need to continue to rack up victories to be a lock for the tournament come March.

Tonight’s game should be led by Bryce Brown and Jared Harper, who are both averaging over 15 points a game. Brown sits at fifth in the SEC in this category. Ole Miss will need to shut him down to be competitive this evening.

They will also need to shut down Harper, who averages over six assists a game. That’s good enough for second best in the league.

With No. 1 Tennessee and No. 5 Kentucky still remaining on their regular season schedule, Auburn will need a win tonight in a winnable game before their tougher matchups up ahead.

But, Ole Miss is looking for a win too – because a win for the Rebels also keeps them in the running for post-season play.

The Rebels square off with the Auburn Tigers tonight at 7:30 PM. You can catch the action live on the @SECNetwork.#RebThreads #RoadRebs #HottyToddy pic.twitter.com/jBHZ8CHsqv

Winning on the Road

Ole Miss (16-7, 6-4 SEC) has been playing well away from their home court this season. On the road, they’re 4-3. And the #RoadRebs just went out to Athens last week, leaving with a win against Georgia. They’ll be looking for another victory tonight.

Expect them to be led by Breein Tyree. The junior is averaging 18.5 points per game, second best in the SEC. Terence Davis will also need to make a presence on both the offensive and defensive end of the floor. He’s averaging nearly a pair of steals per game while dropping just over 16 points on offense.

Devontae Shuler is also averaging two steals a game. He and Davis will both need to step up their defensive game tonight, as they face an Auburn team averaging just over 83 points a game. The only team to average more points per game? No. 1 Tennessee.

Tonight’s game is big for both teams. You can catch the game at 8:30 pm EST on SEC Network.