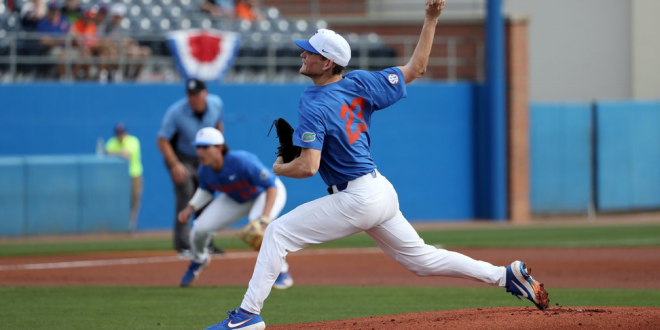 One weekend into the regular season and the Florida Gators’ baseball team is 3-0 for the fifth consecutive year.

Florida capped a winning weekend with a composed 3-1 win over Long Beach State at Alfred McKethan Stadium on Sunday. The win was Kevin O’Sullivan’s 500th Gators’ head coach, and his team now travels to Tampa for a road game against USF on Tuesday.

Starting pitcher Jack Leftwich gave the Gators six strong innings of one-run ball to go along with five strikeouts. Six hits were also enough for the Gators’ bats in this one. They were able to manufacture a pair of key runs by simply making solid contact.

Speaking after the game, O’Sullivan spoke about some of the things that stuck out to him regarding his pitchers’ performances on Sunday.

And that's a big one, as head coach Kevin O'Sullivan becomes the fastest to reach 5⃣0⃣0⃣ career wins at Florida!

Leftwich settles down after early homer

In the second inning, the Gators’ starter gave up a mammoth solo shot to the Dirtbags’ cleanup hitter, right fielder Aidan Malm. It was a hanging breaking pitch that Leftwich still got Malm out in front of, but on a windy day, the ball carried past the left field wall.

That mistake pitch was Leftwich’s only blemish on the day. Aside from a fielding error in the third inning, which O’Sullivan alluded to after the game, Leftwich had most of his pitches working all day. The sophomore finished with only 95 pitches to his name. He didn’t walk a batter, although he did hit one.

Following the departure of important starters from last season, Leftwich could provide great depth to the Gators’ starting rotation as the third starter.

He was asked after the game how he would feel about that role going forward.

After Leftwich, the bullpen did its job for three innings. Hunter Ruth was the bridge to the 9th inning on Sunday. He threw only 11 pitches in the seventh so was sent out for the eighth as well. It was the Gainesville native’s first appearance for Florida after he was redshirted his freshman season due to offseason surgery.

Closer Nolan Crisp recorded his second save of the season despite allowing a leadoff double to hand Florida, and Leftwich, the win. Shortstop Santino Rivera came close to tying the game off Crisp with a two-run homer, but his towering shot was caught at the track by right fielder Wil Dalton.

After the game, O’Sullivan explained how important Ruth could be to his pitching staff this season.

The one negative aspect of the Gators’ Sunday win would come in the top of the sixth inning. Second baseman Blake Reese would injure his left shoulder diving for Aidan Malm’s eventual second hit of the game.

O’Sullivan said Reese would likely get the next couple games off as they look to handle the injury carefully. He explained that it’s something Reese had injured before dating back to last season.

Reese’s double-play partner, shortstop Brady McConnell, was once again a force at the heart of the Gators’ lineup. He collected three of their six hits to go along with an RBI. He’s now 5 for 12 at the plate this season after only slashing .136 in 2018.

A pair of Gators also made their debuts in front of their home crowd today. Freshman third baseman Roberto Peña singled in his first at-bat, and it was his hard ground ball that forced in the Gators’ second run. Catcher Santino Miozzi also saw his first action under O’Sullivan and went 1 for 4 with a run scored.

Florida’s hitters did a good job of forcing starter Alfredo Ruiz to labor. The left-handed freshman threw 95 pitches in only 4.2 innings of work. He dealt four free passes and also hit a batter.

The stark difference between each team’s starting pitcher proved to be key on Sunday.

The manner in which the Gators took their opening weekend series surely would’ve pleased their head coach. With the exception of Game 1 in the series, O’Sullivan received 6 or more innings from his starting pitcher.

The pitchers were helped by some nifty defensive plays behind them too. While the Gators’ offense didn’t tear the cover off the ball on Sunday, they were unlucky to have had a few hard hit balls find leather.

They’ll now turn their attention to a long stretch of in-state rivalry games.

O’Sullivan said that Hunter McMullen will toe the rubber against USF. After their game on Tuesday, UF will travel back home to host North Florida at 6 p.m. The Gators are yet to name their starter for that one.

Then the Miami Hurricanes come to The Swamp for a three-game weekend series starting Feb. 22.

The 2019 NCAA Baseball season is now fully underway. Florida showed this weekend that a team made up of a lot of young, raw talent may still be as dangerous as seasons past.

#Gators finish off #SweepSunday with a 3-1 win over the #Dirtbags.