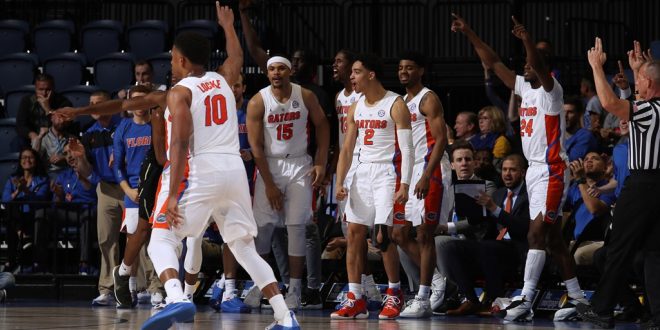 As the regular season winds down, Florida will limited opportunities to prove they should be dancing in March. Wednesday night’s match-up against 13th ranked LSU is a big one.

Florida is currently in the “last four in” category of ESPN’s Joe Lunardi’s Bracketology. A win against the Tigers would help bolster their resume and potentially solidify their spot in the big dance.

Unfortunately for the Gators, the Tigers are one of the hottest teams in the country. They have won 14 out of their last 15 games.

One of those games included defeating the then 7th ranked Kentucky Wildcats on a buzzer beater. LSU is currently tied with Tennessee for first place in the SEC. Joe Lunardi currently has them as a No. 4 seed in the NCAA tournament.

LSU is led by Tremont Waters, who came back for his sophomore season in Baton Rouge. He is playing some of the basketball of his life right now as he is averaging 15.9 points, 6.0 assists and a SEC-leading 3.1 steals per game. Waters will be looking to extend his 16 game double-digit scoring streak.

His achilles heal, however, is turning the ball over. That’s exactly what the Gators made him do when they defeated the Tigers in Gainesville last year. He had seven turnovers in Florida’s nine point win. Not only did he turn the ball over a lot but he also had a tough time shooting the basketball. Waters shot 3-for-15 and scored nine points. That will probably not be the case this year. Andrew Nembhard will have his hands full defensively on Wednesday night.

Naz Reid is dominating the interior for the Tigers, averaging 13.8 points and 6.3 rebounds per game. The dynamic duo of Waters and Reid has given just about every team problems this year.

Marlon Taylor has crazy bounce, but how about the pass from Tremont Waters with one hand to the only spot Taylor can get it. Tremont makes difficult passes look routine. pic.twitter.com/WVRP5NHRkR

What to Watch For Florida

One of the reasons why the Gators were able to get a big road victory over Alabama was the fact that Andrew Nembhard took the next step in his development by taking control offensively. He scored 21 points while going 9-9 from the field. He will need to continue to dominate offensively in order to give the Gators a chance to win on Wednesday night.

Tip-off between the Gators and Tigers is at 7 pm. A live telecast of the game can be seen on ESPN2. A live radio broadcast can be heard on 98.1FM ESPN Gainesville and 850 AM WRUF.