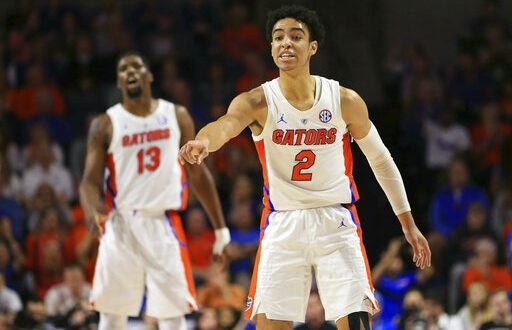 Gator Men’s Basketball Searches for Quality Win Against No. 13 LSU

Time is running out for Florida to build their Tournament resume. With only six games remaining before the SEC Tournament, the Gators need quality wins to punch their ticket to “The Big Dance”.

They were able to take care of business against Alabama on Saturday, which served as a Quad 1 win. Florida has a chance Wednesday night to capture another Quad 1 win as they travel to the bayou to take on No. 13 LSU.

Florida has been on the bubble for most of the season. The Gators have taken care of business against the teams they should beat.

However, they have fallen short in games where their chances of winning were low. The late game struggles and the inabilities on offense have hindered Florida’s chances of making the NCAA Tournament.

With the dominant 71-53 win on Saturday against Alabama, Florida took a step in the right direction to get off the bubble and participate in March Madness. The win gave Florida its third Quad 1 win of the season (at Alabama, at Arkansas and home against Ole Miss). However, this win alone won’t be enough for the Gators.

Ideally, winning at least one of the team’s two upcoming matchups with LSU or even going on the road and upsetting No. 4 Kentucky would greatly improve Florida’s resume.

While fans can speculate what it will take for the Gators to make the tournament for the third year in a row, head coach Mike White says the future remains unknown for his team. What is known, according to White, is the effort it takes for this team to win.

A large reason for Florida’s victory on Saturday was the play of freshman guard Andrew Nembhard.

Nembhard posted a career-high 21 points on a perfect 9-9 from the field. White said his starting point guard has been putting in the extra hours in the gym, getting shots up to improve his spot up shooting.

Throughout the season, shot selection has been a constant problem for the Gators. There have been several games this year where Florida would be just chucking up shots, hoping one would fall.

This would come from a lot of isolation with KeVaughn Allen and Jalen Hudson. Against Alabama, the Gators were more composed with shot selection, passing up good shots for great shots.

White says the shot selection hasn’t only improved Florida’s offense, but also the play of Nembhard.

Nembhard echoed his coach’s feelings by citing the opportunities he got thanks to his teammates was the reason for the stellar performance.

LSU poses a formidable opponent for the Gators tonight. They have been one of the hottest teams in the country, winning fourteen of their last fifteen games. However, it hasn’t been easy lately. The last five games for the Tigers have been decided by sixteen points combined, with the last four wins being decided by five points or fewer.

White knows LSU has many strengths that could mean trouble for Florida.

Nembhard feels there is a way for Florida to combat their strengths.

What makes LSU so dangerous is the team’s depth. They have a multitude of guys who can make an opponent pay. The Tigers are led by sophomore guard Tremont Waters, who leads the team with 15.9 PPG.

Waters struggled against Georgia on Saturday. Freshman Naz Reid stepped up, scoring all of his 13 points in the second half. This propelled LSU to the 83-79 win.

White said his team needs to pay attention to detail if they want to get out of the Tiger’s den with a much-needed, resume-boosting win.

The Gators and Tigers tip things off from Baton Rouge at 7 p.m.