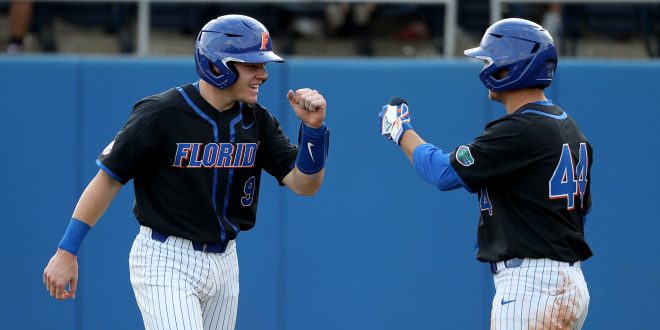 The North Florida Osprey’s arrived in Gainesville today for their fourth game in a row against an SEC opponent.

UNF is set to face the No. 5/3 Florida Gators Wednesday night in Alfred A. McKethan Stadium. First pitch is set for 6 p.m.

So Far This Season

North Florida opened up their season last weekend against Missouri. The Ospreys took the series winning 2-of-three games against the Tigers. This was the programs second-ever series victory over an SEC school.

Heading into this matchup, the Ospreys have four players hitting over .400. The Gators need to be on the look out for redshirt senior Wes Weeks. Week went 7-for-7 to start the season. His seven consecutive hits ties an UNF record. Weeks ended up finishing the weekend going 9-for-13 hitting .692 with three RBI and a home run.

As his performance against Mizzou on Sunday, junior transfer Max McKinley was named the ASUN Pitcher of the week. However, UNF’s starting pitcher tonight against Florida is to be determined.

North Florida head coach Tim Parenton says there will be a lot of different guys on the mound tonight.

The Gators are currently ranked No. 3 in the NCAA Division 1 baseball rankings, but is also ranked No. 5 in the USA Today Baseball Top 25 Coaches Poll.

Florida opened their season last weekend with a sweep over Long Beach State at home. However, the Gators fell last night, 6-1, to the USF Bulls. The Ospreys need to take advantage of the Gators disappointed last night and play off their emotions.

However, this is the Ospreys first road game of the season. North Florida will have to put their jitters aside and bring their best performance to Gainesville.

Freshman pitcher Christian Scott will start on the mound tonight for the Gators. Scott had his first collegiate appearance on Saturday against Long Beach State. He played one innings and had one strike out.

The Gators lead the all-time series 13-6.

Florida has won the last seven meetings between the two teams. These two teams played each other twice last season with the Gators winning both games, 4-0 and 8-3.

Florida leads 11-4 in Gainesville, while UNF leads 3-2 in Jacksonville.

Sydney is a senior studying telecommunications with a specialization in sports media at the University of Florida. She is a multimedia sports reporter for ESPN 98.1 FM/850 AM WRUF and WUFT-TV.
Previous Gator Men’s Basketball Searches for Quality Win Against No. 13 LSU
Next Next chapter of storied Duke-North Carolina rivalry set to be written