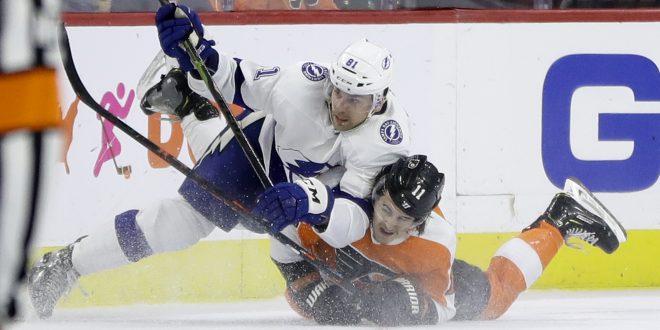 The Tampa Bay Lightning remain at the top of the NHL after another victory last night over the Philadelphia Flyers, 5-2. The win puts the Lightning at a seven-game winning streak and now moves the team to 46-11-4, putting them ten games ahead of any other team in the league.

Five different players put up the five goals for the team including Mikhail Sergachev, Alex Killorn, J.T. Miller, Yanni Gourde, and Ryan McDonagh on an open net to end the game. Killorn’s goal put him at his 100th career goal.

#NHL
The Tampa Bay #Lightning are the sixth team to record three winning streaks of at least 7 games in one season.

Quick Start for The Lightning

Tampa came out strong scoring three goals just in the first ten minutes of the game. With a minute in, they were already taking shots on goal and their first goal was scored by Sergachev two minutes into the game. They continuously kept the puck on the Flyers side of the ice.

Two of the Lightning leading players were on the bench last night. Tampa’s leading defensemen Victor Hedman was out due to a lower-body injury in Monday’s game and their top goal scorer Brayden Point was out for missing a team meeting. Their starting goalie Andrei Vasilevskiy was also resting last night.

The newest episode of "Our Goalie Did WHAT?" is now streaming.#TBLvsPHI | #GoBolts pic.twitter.com/uAqHeIvbnT

However, the team showed how anyone can step up. Louis Domingue was in place for Vasilevskiy and had 28 saves on goal for the team. Filling in for Point, Tyler Johnson had a few good looks. And Jan Rutta coming from Syracuse in place of Hedman.

“Our depth is one of our biggest assets,” Miller said. “Every team needs guys to step up. You’re not going to get it from the same guys every night. So that’s obviously a good quality to have,” as reported by Diana C. Nearhos of the Tampa Bay Times.

The Lightning head back to Amalie Arena to host the Buffalo Sabres tomorrow night at 7:30. In their last match-up, the Lightning won 5-3.

The defending Stanley Cup Champions will officially raise their banner in Wednesday’s home opener. The …