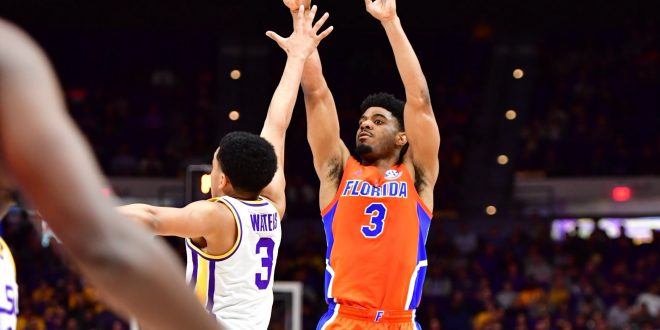 It’s been a challenging season for Jalen Hudson and the Gators, but things are looking up for both him and his team.

After averaging 15.5 points per game last season on 45.5% shooting from the field and 40% on threes, Jalen Hudson’s 2018-2019 season has been a major disappointment. He is only averaging 6.8 points per game on 31.1% shooting. He was a very reliable shooter last year for the Gators, but he’s only shooting 22% from beyond the arc this season. As a team, Florida has struggled to score with any consistency this season. Many have been calling for Hudson to step forward as a lead scoring option for the team, and it seems Hudson is trending towards that role as of late.

From November 21st to January 30th, Hudson only scored in double figures twice in 17 games. However, his recent stretch has been much better. He’s scored in double-digits in four of the team’s last six games. In Florida’s statement win over #13 LSU, the 6-6 guard played a big role in the victory. He tied his season high of 15 points, and shot a respectable 6 of 13 from the field. He hit three shots from beyond the arc, which is more than he’s made in any conference game so far. Hudson was a leader on offense throughout the first half and really helped the team jump out to a lead.

The Gators have won three games in a row against quality opponents, and have now positioned themselves for NCAA Tournament contention. They are playing their best basketball of the season at the moment. Jalen Hudson’s level of play has certainly helped the Gators as of late, but there are some other reasons Florida’s spot in the standings has improved.

Freshman Andrew Nembhard has been more aggressive and more comfortable on offense. He had 21 points on 9-9 shooting against Alabama, and he finished with 8 points and 8 assists against LSU. His level of play has led to better looks for himself and his teammates. He’s been a fantastic passer all season, but his growing abilities as a scorer have really opened up the Gator offense.

KeVaughn Allen had a rough time in the win against Vanderbilt, but he’s has two very good performances in a row. He finished with 13 points, 4 rebounds, and 3 assists on 5-9 shooting against Alabama. Against the Tigers in Baton Rouge, Allen scored 21 points on 6-12 shooting to lead the Gators in scoring. Twelve of those points were in overtime, as he hit numerous clutch shots down the stretch.

Defense Has Kept it Going

With Andrew Nembhard, Jalen Hudson, and KeVaughn Allen giving Florida’s offense a boost, the team’s defense has continued to be elite. The Gators held Alabama, the 55th most efficient offensive team in the country according to KenPom.com, to just 53 points at home. The Crimson Tide only hit five threes and had just six assists. In the next game, Florida held LSU to seven threes, only nine assists and forced 14 turnovers. They did a great job on Tremont Waters, who is one of the best offensive players in the SEC. Waters scored 10 points on just 3-12 shooting.