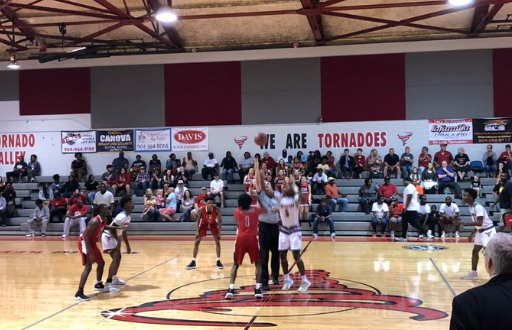 The Bradford Tornadoes boy’s basketball season has ended with a 20 point defeat to the Andrew Jackson Tigers of Jacksonville, 62-42. The 20 point loss is the worst home loss of the season and the second-worst loss of the season for Bradford (@Hawthorne 65-32). Both teams came in with two completely different mindsets. The Tigers came in hungry and the Tornadoes looked stagnant. The Tigers, who had lost their district championship game against Jacksonville Bolles just six days earlier, came out with the motivation to correct errors and to potentially start a deep playoff run. The Tornadoes, still riding high off of their fourth consecutive district tournament title, came out sluggish.

Andrew Jackson drove for nearly an hour to play a basketball game and they did not stop when they got in Starke. Driving to the paint, blocking shots and setting an overall blistering pace, it was something the Tornadoes just could not keep up with. With a scoring differential of 16-7, the lone first quarter highlight for Bradford was a clutch 3 from Jordan Lee at the buzzer. The second quarter was much the same, Jackson was just more focused. The Tigers rode another big quarter, with a scoring margin of 13-12. Bradford could not narrow the gap going into halftime.

Bradford decided to implement a full court press in the third quarter and looked to be getting themselves back into the game. The added pressure on Jackson led to an increase in fouling which narrowed the game to a single-digit margin of eight points. But Jackson found its groove and increased its lead back up to 12 and did not let go of it. Looking to run out the clock much of the fourth quarter, Jackson maintained the lead and Bradford’s coach Brent Roberts decided to get some of his guys more time on the court and sat his starters.

“The kids played hard. I dont fault them for any of that. They’re just an awful good team. That team is not a district runner-up team.” -Coach Roberts

Bradford ended a good year with another district title crown, but with just a little more gas in the tank could have been looking at a couple of more weeks of basketball. Andrew Jackson looks to redeem their loss in the district championships as the travel to Bolles to face the Bulldogs on Tuesday.

Previous Jalen Hudson, Gators Trending in the Right Direction
Next Florida Women’s Basketball Falls 69-51 at LSU, Drops to 6-20 On Season