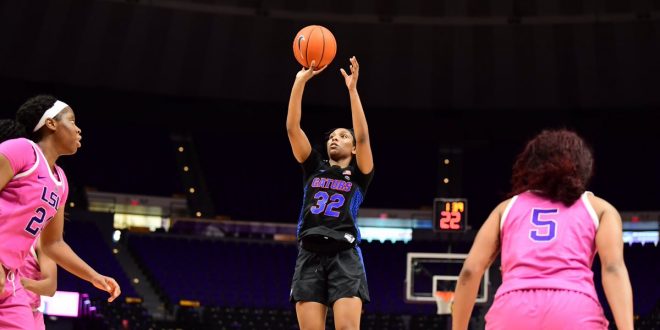 Prior to Thursday night, Florida women’s basketball sat at a 6-19 overall record and were 2-10 in SEC play. Even so, the Gators arrived into their game against LSU with an opportunity to reach double-digit wins this season.

UF started off well against the Tigers in Baton Rouge but were unable to carry their momentum to the second half as Florida lost to LSU 69-51 Thursday night. Gator coach Cameron Newbauer talked about his team’s inability to execute for the entire four quarters.

“We knew we had to play aggressively against a really tough defensive team like LSU. We stressed that going in, but we didn’t maintain our focus for 40 minutes. At times, we competed hard on both ends, but there were too many lapses.”

The Gators had a healthy balance of efficient offense and good defense to match in the first quarter. In the first four minutes of play, UF knocked down a couple of triples and gained an early 8-6 advantage.

LSU then went on an 8-0 run, with three of those baskets coming from leading scorer Ayana Mitchell. Emanuely de Oliveira snapped the Tigers’ run on her way to scoring six points in the period.

The freshman already up to 6 points. pic.twitter.com/VsIMazoiDd

Newbauer’s group shot nearly 67 percent from both the field and behind the arc in the opening frame, but couldn’t sustain that success in the second quarter. Florida shot just 26.3 percent over the next 10 minutes and made only 2 of their 10 three-point attempts.

Despite their struggles, the Gators entered halftime down just 31-28 and were doing well in the rebounding department.

Florida did not necessarily have a bad quarter to start the second half, but LSU seemingly did everything right.

Led by Khayla Pointer’s eight points, the Tigers scored 20 points in the third quarter and shot 50 percent from the field. The team also got it done defensively, outrebounding Florida 10-7 and getting four steals in the frame.

The Gators did shoot 40 percent in the third quarter, but they turned the ball over seven times en route to being outscored 20-12 in the period.

Florida shot better than the Tigers in the final 10 minutes, but LSU’s dominance on the glass was too much for the team. UF was outrebounded 14-6 and gave up a staggering nine offensive boards in the fourth quarter.

Even though UF eventually lost 69-51, there were some bright spots for the Gators during the game. Leading scorer Funda Nakkasoglu registered 11 points in the box score, marking the 20th contest this season where she has scored in double figures. True freshmen Ariel Johnson and Emanuely de Oliveira also contributed 18 points combined on 50 percent shooting.

Florida has just three games left in the regular season, with two of them being at home next week. UF will take on Texas A&M on Monday and Georgia on Thursday.

After those SEC matchups wrap up, the Gators will take on Vanderbilt on the road before beginning the SEC tournament.