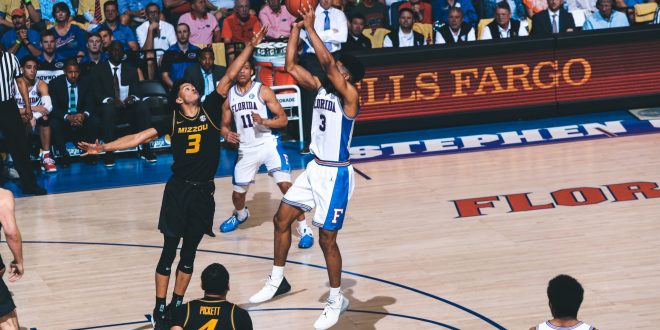 The Gators’ men’s basketball team picked up their fourth straight win on Saturday against the Missouri Tigers by a score of 64-60.

Gators Have Another Rough First Half

The Gators had one of their worst halves of the season. In the opening 20 minutes, Florida only scored 24 points. They shot 7-23 from the field and only made one three-pointer. They committed seven turnovers and had just two assists. KeVaughn Allen had another slow start, scoring just three points on 0-5 shooting. Andrew Nembhard and Noah Locke were both held scoreless in the opening half as well. It was Florida’s third-lowest scoring first half of the season. The Gators have had quite a few rough first halves this season, but luckily they were able to claw their way back into the game in the second half.

The win wasn’t pretty, but a win is still a win. This is the fourth straight win for the Gators. The team is now 16-11 overall and 8-6 in SEC play. Florida has improved on the offensive end, and their defense has continued to stifle their opponents. Coach Mike White credited the play of the freshmen, KeVaughn Allen, and Jalen Hudson for the team’s improvements. White also said that the team is doing a better job of “picking their spots.”

The Gators are putting things together at the right time, and seem to have positioned themselves for an NCAA tournament berth. Still, they have to close out the season strong.

In two straight games, KeVaughn Allen has been ice-cold in the first half and red-hot in the second half. He was scoreless at halftime against LSU, but scored all 21 of his points in the second half and overtime. Against Missouri, Allen turned an 0-5 start into a 17 point performance on 4-10 shooting. He hit 9-10 free throws and added two steals as well. With 5.5 seconds remaining and the Gators up by just two, Allen hit two free throws to seal the win. Senior guard Jalen Hudson said that coach White has called KeVaughn Allen’s number quite a few times and that Allen has performed in those moments.

Isaiah Stokes has been a comeback story for the Gators. He began the season still somewhat recovering from a knee injury. He didn’t get many minutes early in the season, but he’s been gaining momentum as a player. Mike White mentioned that Stokes has made a concerted effort to improve his conditioning, and Stokes is now seeing the benefit on the court. Against Missouri, Stokes played a season-high 18 minutes. He scored 6 points and had 2 assists. He provided a jolt of offensive production in the first half and gave the team a few much-needed points. Stokes mentioned his focus on the defensive end:

Jalen Hudson produced another strong performance tonight. He had 11 points on 4-7 shooting and added 5 rebounds. This marks the fifth time in the last seven games that he has scored in double digits. He has finally become a very solid offensive option for the team like he was last year. Hudson was a team-high +10 on the night. Hudson spoke about his level of play after the game:

The Gators have four games remaining in the regular season. Their next test is a road game against Vanderbilt on Wednesday at 9 p.m. After that, the team will host Georgia and LSU in back-to-back home games. The final game of Florida’s regular season is on the road against Kentucky.