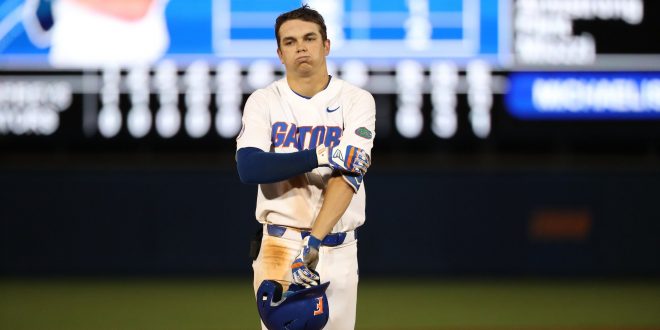 Gator Baseball Continues To Struggle In Loss To Miami

The Florida Gator baseball team falls for a third straight game, this time losing at home to Miami 5-2 Friday night in the first of a three game series.

Struggling is a relative word, but junior right-hander Tyler Dyson didn’t pitch all that badly.  The Friday night starter pitched four innings, allowing two earned runs on six hits while walking one and striking out three.  He threw 92 pitches, while his counterpart, Miami starter Evan McKendry threw only 91 pitches in seven innings of work to get the win.

Lefty Jordan Butler came in to relieve Dyson and ended up taking the loss after giving up two runs and three hits in two innings of relief.  Freshman Hunter Ruth got on the mound in the top of the seventh, and allowed one unearned run.  Freshman David Luethje pitched an inning of scoreless relief in the ninth.

Miami retakes the lead with a pair of runs in the 7th.#Gators due up: Acton, Smith, Reese

Headed to the bottom of the ninth, Miami leads 5-2.

Due up: Dalton, Calilao, Acton

Florida has made uncharacteristic mistakes, and has not hit well in starting the season 3-3.  Gator coach Kevin O’Sullivan spoke after Friday’s defeat on the unfamiliar situation the Gators have found themselves in early in the season.

Tyler Dyson understands the struggles Florida has faced early on in the season and has full confidence in the team.

Florida batters have struck out 35 times over the last three games- a unusually high number for the Gators.  In the first three games of the season, the Gators struck out only 21 times.  And scoring runs lately has been tough for Florida as well.   In Friday’s game, the Gators scored a run in the fourth inning on an RBI triple by Kendrick Calilao and the Gators tied the game at 2-2 in the sixth on an RBI ground out by Nelson Maldonado.   But in the top of the seventh, the Hurricanes again took the lead on a Michael Amdetis solo homer and an RBI bunt single by Freddy Zamora and they added another run in the eighth to seal the win.

Florida’s Tommy Mace will take the mound as the Gators look to even out the series against the Hurricanes on Saturday. First pitch is at 6:30 p.m. You can catch the game live on ESPN 98.1/850 AM WRUF.