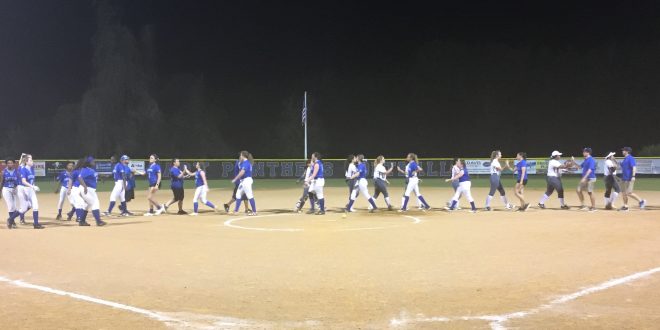 Great way to end the third inning. Megan Hutchinson caught an air ball. The Blue Wave is down 0-5. @ESPNGainesville pic.twitter.com/5p7iWWUNOB

Blue Wave pitcher Chandler Loveday had a difficult game on the mound. She walked various players, one of them being a hit-by-pitch on the top of the fourth inning.

During the bottom of the fifth inning, the catcher Shelby Sparkman, dropped a few balls, allowing Newberry to steal bases. With bases loaded, one of these drops allowed a Newberry player to come home. A strikeout by Loveday ended the fifth inning.

In the top of the sixth inning, Sparkman hit a double and Megan Hutchinson was sent to first base after the fourth ball. After the catcher drops the ball, both players attempt to steal the bases, and while Sparkman is able to make it home safely, Hutchinson was out. Sparkman was able to put PK Yonge on the board.

In the bottom of the sixth, Newberry got another hit but then a second hitter was out when Hutchinson catches her second pop up of the night. With a player on third base, the hitter hit a deep ball to left field, allowing the player to get home. Another ball was dropped by the PK Yonge catcher, allowing another player to score. The inning ends with a strikeout by Loveday.

Pk Yonge pitcher, Chandler Loveday, finishes the sixth inning with a strikeout. The Blue Wave was able to get on the board 1-9 with a run by Shelby Sparkman. @ESPNGainesville pic.twitter.com/1AnLtiLUXJ

In the final inning, the Blue Wave were not able to score and the game finishes with a double play by Newberry.

And that’s the end of the game! Newberry High School defeats @pkyongedrs 1-9. They end the game with a double play. @ESPNGainesville pic.twitter.com/ck4nB6bdLW

After the game, Blue Wave Head Coach, Ryan Stewart, talks about the game and the players’ performance.

After the PK Yonge vs Newberry High School softball game, @CamilaMaffuz and I caught up with the Blue Wave head coach, Ryan Stewart. @ESPNGainesville pic.twitter.com/YTqpEeK77b

Sara Dastgerdi is a current student at the University of Florida.
Previous Gator Baseball Continues To Struggle In Loss To Miami
Next Preview: Mississippi State Bulldogs Host the South Carolina Gamecocks 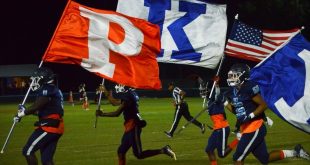