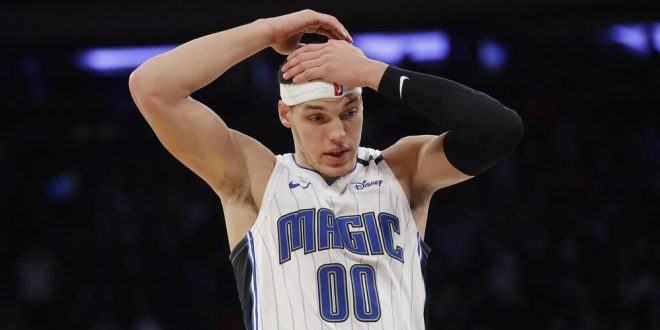 Orlando Magic's Aaron Gordon reacts during the second half of the team's NBA basketball game against the New York Knicks on Tuesday, Feb. 26, 2019, in New York. The Knicks won 108-103. (AP Photo/Frank Franklin II)

The Orlando Magic just couldn’t hang onto a double-digit lead in Madison Square Garden on Tuesday as they fell 108-103 to the New York Knicks.

The Magic were on a five-game winning streak going into the All-Star break, but have since lost two of the last three to bottom-tier teams. An ugly one to a 13-win Knicks team is just the latest of Orlando’s struggles.

The Magic took a 12-point lead into the fourth quarter after a strong performance from the starting five. The same could not be said for the bench.

New York outscored Orlando’s bench 75-7, putting the fate of the game solely on those starters.

Despite trailing the entire game, the Knicks opened the final 12 minutes with an 11-1 run.

An alley-oop dunk by Mitchell Robinson tied it with 4 minutes remaining. His 17 points, 14 rebounds, six blocks and three steals were huge for New York.

A minute later, Robinson hit a free throw to give the Knicks their first lead 101-100. New York used a three-pointer and two more free throws to extend the lead with time winding down.

Terrence Ross hit a three of his own with 28 seconds left to cut into the deficit, but the pair of free throws that followed sealed it for the home team.

Aaron Gordon and Nikola Vucevic dropped 26 points apiece in the game and Vucevic led the team with 11 rebounds.

Jonathan Isaac (16), Evan Fournier (15) and D.J. Augustin (13) all scored double figures as well. That just wasn’t enough to overcome the absence of the bench.

The Magic had opportunities to get wins over the Knicks and the Bulls over the last week, but now they will have to try to make it up against some of the best teams in the NBA.

Orlando seemed to be a surefire playoff team not too long ago, but it now finds itself a full game out.

The Magic will be back home for a matchup with the Golden State Warriors before road tests against the Indiana Pacers, Cleveland Cavaliers and Philadelphia 76ers.