After many wins and a playoff run, the PK Yonge girls basketball team’s season came to a close Wednesday morning in the 4A state semifinals. The Blue Wave fell to one of the top teams in the nation, Miami Country Day, 81-50. They fell short of a state championship, but PK Yonge finished the season with an impressive 28-2 record.

Despite falling short, the Blue Wave still reached the state Final Four and got to play on high school basketball’s biggest stage against top talent.

The Blue Wave fought hard, but were no match for the Miami Country Day Spartans. According to Maxpreps rankings, the Spartans are first and second in their respective rankings.

The Spartans jumped out to an early lead and never looked back, despite the Blue Wave trying to get back into the game.

While trying to make a game of things, PK Yonge still found themselves down by 30 heading into the final quarter. The Spartans were just too much of a mismatch for the Blue Wave. According to Coach Powers, they were bigger down low and had shooters all around the court.

Coach Powers had a lot of praise for the team that would end the Blue Wave’s season.

The Spartans were simply the bigger and more skilled team. Their size was a big factor, thanks to Chantell Gonzalez, the Spartans 6’9 center.

Final Score for the first 4A Girls semifinal game.. 81-50. Miami Country Day over PK Yonge. Both teams played with heart! We will see MCD tomorrow at 2pm. Come out and support these ladies! #FHSAAGBK

The season may not have ended the way the Blue Wave have hoped, but the future is looking bright for the program. PK Yonge had just four seniors on their current roster that made it to the state semifinals.

So, the Blue Wave will be returning a large chunk of their roster. Also, their top-two scoring leaders are returning for next season, in junior Courtney Moore and sophomore Mya Mcgraw. 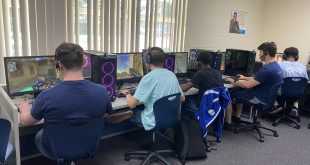 Esports is Coming to Florida Schools