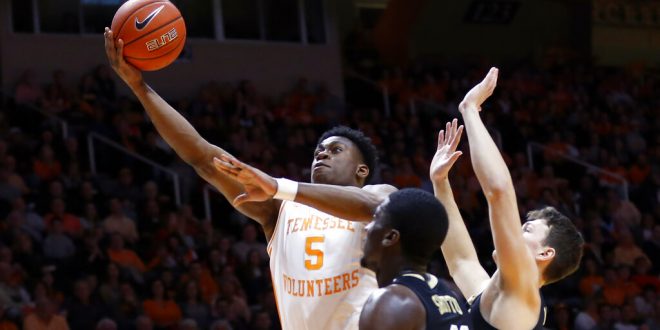 The No. 7 Tennessee Volunteers men’s basketball team travels to Oxford, Miss. tonight to face the Ole Miss Rebels in an SEC matchup.

Tip-off is set for 7 p.m. in The Pavilion at Ole Miss. Tickets are already sold out, except for standing room only. However, coverage of the game can be found on SEC Network. Tennessee is actually the highest ranked team to play at Ole Miss since January of 2017.

Tennessee leads the series over Ole Miss 73-44. The last time these two teams met was during February of 2018. The Volunteers defeated the Rebels last year 73-65.

Seventh-ranked Tennessee heads into this matchup with a 24-3 overall record and is 12-2 in conference play. A win for Tennessee tonight would be the fifth time in school history that the program would have 25 wins in a season.

Unfortunately for Tennessee, two of their three losses have occurred within the last three games and both were on the road. Tennessee fell to No. 5 Kentucky, 86-69, in Lexington on Feb. 16 and the Volunteers are now coming off another loss to No. 13 LSU, 82-80, last Saturday.

The Vols are second in the NCAA in assist-to-turnover ratio at 1.68 right behind Gonzaga. They are also third in field goal percentage at 50.4 and fourth in assists with 19 per game.

Vols guard Jordan Bone also leads the conference in assists per game with 6.3

Ole Miss enters tonight 19-8 on the season and 9-5 in SEC play. While the Rebels are clearly the underdog, they are entering this matchup with some momentum. Ole Miss has won 5 of its last 6 games and are coming off a 72-71 win against the Georgia Bulldogs. This is the first time the Rebels have swept the Bulldogs on a season series since 1989.

The Rebels currently leads the SEC in free throw shooting with 77 percent. While none of Ole Miss’ players lead any stats in the conference, guard Breein Tyree is ranked third in scoring with 18.4 points per game and free throw percentage with 83.7. He’s also ranked sixth in field goal percentage with 48 percent and three-points with an average of 2.2 made per game.

Ole Miss also has two players in the top five of the SEC in steals per game. Guard Devontae Shuler ranks fourth in steals with 1.8 per game, while guard Terence Davis ranks fifth with 1.7.

Back at it on Craddock Court looking for win number 2️⃣0️⃣ on the season. Tipoff vs. Tennessee set for 6PM on the @SECNetwork.#RebThreads #PackThePavilion #HottyToddy pic.twitter.com/c15OborxzX

Sydney is a senior studying telecommunications with a specialization in sports media at the University of Florida. She is a multimedia sports reporter for ESPN 98.1 FM/850 AM WRUF and WUFT-TV.
Previous PK Yonge girls basketball team falls in state semifinals
Next SEC Hoops Preview: Auburn takes on Georgia