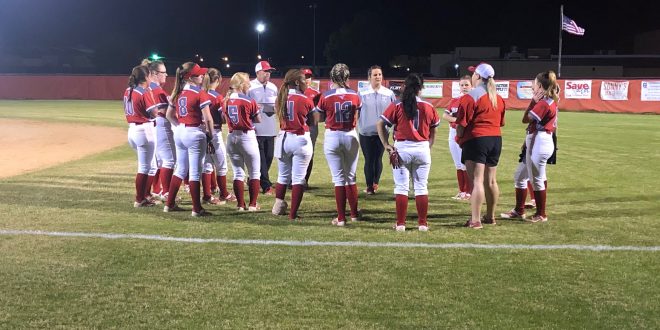 The Bradford Tornadoe’s softball team defeated the P.K. Yonge Blue Wave 14-4 in a home conference game Tuesday night.  The game ended via mercy rule in the bottom of the fifth inning as Bradford improves to 6-2 on the season.

The Bradford Tornados are up 4-1 against the P.K. Yonge Blue Wave going into the second inning! @ESPNGainesville

In the game against the Blue Wave, Bradford was down 1-0 when Savannah Seeley hit a single to left field to score a run that tied the game.  Directly after, Jaycea Edwards had a beautiful hit to center field with the bases loaded that drove in three runs, putting Bradford up 4-1.

The Tornados never looked back as they scored three runs in both the second and third innings to put them ahead 10-2 going into the fourth inning.  Stellar pitching by Bradford allowed for fast innings, and good defense helped keep the Blue Wave offense in check most of the night.

Bradford finished the game in the bottom of the fifth after a right field triple by Brooklyn Wiggins sent her to third base, followed by a hit by Allie Funderbunk that sent Wiggins home. The game ended after a couple of walks allowing the Tornados to mercy rule the game 14-4.

Bradford dominated the game with steals. In the bottom of the second inning, they had three consecutive steals of home. Emily McCoy was able to steal home after the Blue Wave catcher missed a catch from the pitcher, making it a 5-1 game.  During that play,  McFarland was able to steal third base and immediately stole home on the next play making it a 6-1 game. A third steal of home was executed by Talia Brown after another missed catch by the Blue Wave catcher.

During the bottom of the fourth inning, a bunt by McFarland allowed Taylor Reddish to score and then Krista Hildebran was able to steal home.

This is the second mercy victory of the season for the Tornadoes, as they defeated Fort White 17-2 in February.

The Bradford Tornados mercy rule the P.K. Yonge Blue Wave 14-4 in the bottom of the 5th! @ESPNGainesville