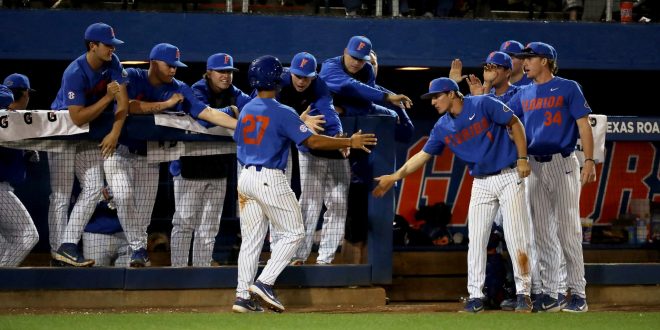 The Fresh from Florida Sunshine Showdown proved to be just that, a showdown between two of college baseball’s top teams.

The No. 7 Florida Gators squared off against the No. 6 Florida State Seminoles in a rivalry match-up on Tuesday night in McKethan Stadium. The Gators came away with a huge 20-7 victory over the Seminoles.

The first four innings proved to be an all too familiar scene for the Gators. A slow start at the plate, early struggles on the mound for young pitchers, and the opposing team having all the momentum.

However, the Gators shook off their problems to come away with an encouraging victory heading into to conference play.

Florida’s Slow Start at the Plate

Florida State opened up the game hot at the plate jumping out to a 1-0 lead at the bottom of the first. On the other hand, the Gators failed to capitalize offensively.  In the first inning, third baseman Drew Mendoza would give Florida State the lead with a double that drove home second baseman Mike Salvatore.

Mendoza went one for two at the plate, including an RBI.

Trailing 2-0 in the second inning, sophomore Jordan Butler turned up the heat on the mound, striking out back to back batters. Butler finished the night with three strikeouts in 2.2 innings.

Wil Dalton got things going at the plate, with a double to left field. However, the Gators would leave the bases loaded in the bottom of the second.

Don’t Call it a Comeback

At the top of the fifth the Seminoles began to pull away with the lead.

A grand slam from J.C. Flowers put the Seminoles in a favorable 6-0 lead in the top of the fifth. However, things quickly changed in the bottom of the fifth, shifting the momentum in favor of the Gators.

Put it on the board! (literally) pic.twitter.com/5ngzqYkxi6

After Florida State pitcher Jonah Scolaro loaded up the bases, freshman Kendrick Calilao doubled to right field, putting the Gators on the board but they still trailed 6-2.

Calilao discusses the Gators’ mentality after being down 6-0 in the middle of the fifth inning.

Eight of Florida’s batters recorded at least one hit against the Seminoles, with six batters getting multiple hits.

Calilao continued to put on show, going four for six at the plate, including six RBI and three runs. In the bottom of the eighth, Calilao hit a grand slam to further secure the Gators’ victory.

Gator coach coach Kevin O’Sullivan discussed the shift in momentum from the fourth to the fifth inning.

The Gators begin conference play this weekend in a series match-up against Mississippi State. The first pitch is set for 6:30 p.m. on Friday.