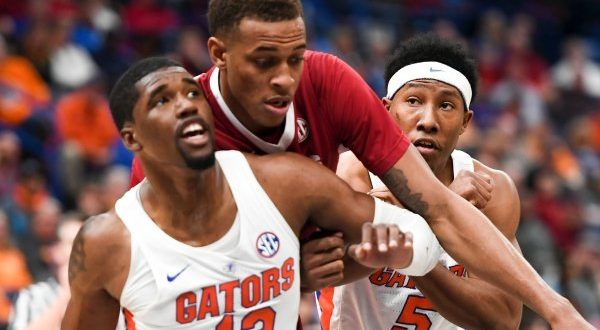 Gators Face Off Against Razorbacks in SEC Tournament

The Florida Gators are currently in Nashville to compete in the SEC Tournament. They got a first round bye and are set to play a hot Arkansas team on Thursday afternoon. The Razorbacks won three straight games to close out conference play, including solid victories over Ole Miss and Alabama.

Both teams are on the fringe of making the NCAA Tournament. Whoever wins this matchup will undoubtedly strengthen their case to make the big dance.

What to Expect From Arkansas?

Arkansas runs everything through their dominant big man, Daniel Gafford. Gafford is one of the best two-way players in the SEC. He ranks in the top three in the SEC in points (17.0 per game), rebounds (8.7 per game) and blocks (2.1 per game). The 6’11” sophomore dominates the interior on both sides of the ball.

Offensively, he has a very soft touch around the rim and has the length to get off just about any shot he wants. Defensively, his length allows him to either block or contest every shot that’s taken within his vicinity. Teams are forced to take more outside shots against Arkansas because Gafford deters them from consistently attacking the basket.

The Razorbacks have two other elite scorers in Isaiah Joe and Mason Jones. Joe is averaging 14.0 points per game while Jones is putting up 13.8 points per game. Add in playmaking point guard Jalen Harris (5.5 assists per game) and it’s easy to see why Arkansas can catch fire on any given night.

In their matchup earlier in the season, the Gators won 57-51. Both teams really struggled to score the ball, which was a factor of elite defense.

Mason Jones torched the Gators with 30 points, but everyone else on Arkansas had an off night. The Gators limited Gafford to only 9 points and 12 rebounds in 27 minutes.

KeVaughn Allen led the team with 18 points and Noah Locke added 10. Both players have had a very difficult time scoring the ball as of late.

In order for the Gators to win again, they must continue to limit Gafford’s production and make their other players beat them. In a recent interview, Arkansas head coach Mike Anderson pointed out that the team has been successful recently because they have found their identity.

“Maybe we have found our identity, and know that our identity goes through Daniel Gafford.”

The Razorbacks like to feed Gafford in the post and force teams to come double him, which always results in someone else being open.

If the Gators can limit Gafford’s production and force the Razorbacks to take contested shots, they’d have to feel good about their chances to come out with a victory.