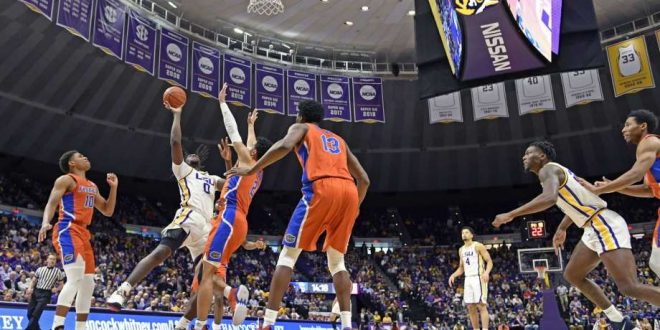 Gators Looking to Strengthen Their Resume In SEC Quarterfinal Against LSU

The Florida Gators helped their case to be included in the NCAA Tournament as they defeated the Arkansas Razorbacks 66-50 in the 2nd round of the SEC Tournament.

The Gators and Tigers have met twice in 2019 and both match-ups went to overtime.

Back in February, Florida went into Baton Rouge and handed LSU an 82-77 overtime defeat. The Gators would have won both games if it wasn’t for Tremont Waters’ heroics at the end of regulation. Waters drove the length of the court in the final five seconds and hit a layup to send the game into overtime. The Tigers escaped with a 79-78 victory.

A lot has changed since LSU’s dramatic win over Florida. The Tigers will be without head coach Will Wade for the foreseeable future. Wade was suspended indefinitely by LSU after FBI wiretaps revealed Wade discussing an offer he made for a recruit. The Tigers are now led by interim head coach Tony Benford. Even without Wade, the Tigers were able to defeat Vanderbilt 80-59 to clinch the SEC regular season title.

Both teams are familiar with each other so it should be another close game in Nashville. Florida will once again try to suppress the production of the Tigers’ leading scorer, Tremont Waters. Waters is averaging 15.3 points, 5.9 assists and a league leading 3.1 steals per game.

Many believe that the Gators punched their ticket into the NCAA Tournament on Thursday with their convincing win over Arkansas. A win over LSU on Friday would almost guarantee them a spot in the tourney.

#Gators end their losing skid with a 66-50 win over Arkansas in the SEC Tournament.

That should punch their ticket to the Big Dance.

Coming into the game, Joe Lunardi of ESPN had Florida in the “last four in” category. Two wins over the SEC regular season champs would erase any uncertainty and likely put the Gators in play for a better seed.

Florida and LSU will tip-off from the Bridgestone Arena in Nashville, Tennessee at 1 p.m. ET. The game can be seen on SEC Network and can be heard live on ESPN 98.1 FM & 850 AM WRUF.