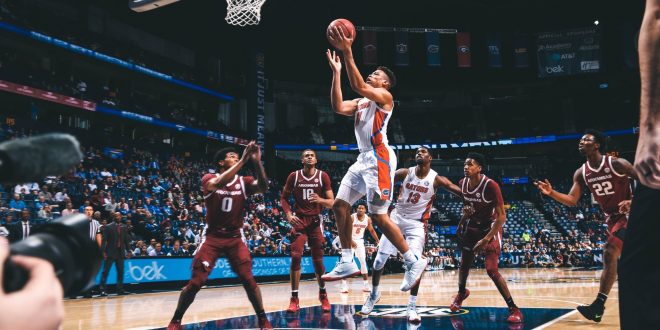 Gators Open Up SEC Tournament with Win Over Arkansas

The Gators men’s basketball team picked up a SEC tournament win against the Arkansas Razorbacks by a score of 66-50.

The Gators were able to rebound from a rough start to take a halftime lead. The Razorbacks came out hot from the jump. They hit seven of their first 12 attempts and leaped out to a 17-9 lead in the first nine minutes of the game.

Arkansas came out pushing the pace on offense and pressuring the Gator offense into quick and inefficient shots. The Razorbacks shot 50 percent from the field in the first half while the Gators shot just 37.5 percent.

Despite the discrepancy, Florida was able to fight their way back by forcing 9 turnovers and grabbing 10 offensive rebounds in the opening half.

The 6-5 freshman scored a career-high 20 points and grabbed a game-high 12 rebounds, including six offensive rebounds. He shot 8-14 from the floor and hit three shots from deep. He looked like the best player on the floor for most of the game and became the first Florida freshman to record a double-double in the SEC tournament since the 2000 SEC tournament.

KeVaughn Allen also had himself another great performance against the Razorbacks. The senior guard put up 17 points on 6-14 shooting and was a huge reason why the Gators were able to pull away in the win. In his eight career games against Arkansas, Allen has averaged 16 points per game and has a 7-1 record.

“I already knew KeVaughn was going to have a great game…We always tell him to keep shooting…I’m happy he had a good game for us.” Johnson on Allen’s great performance against Arkansas today. @ESPNGainesville

Florida’s defense looked a little slow in the first stretch of the game, but the Gators really turned up the intensity in the second half. The Razorbacks were held to just 22 points over the final 20 minutes. They made 6 of their 24 field goal attempts and only hit one three-pointer.

Daniel Gafford scored 8 points in the second half, but no other Arkansas player was able to find any success down the stretch. Isaiah Joe had 9 points in the first half but was held without a field goal after the break.

No FGs for Arkansas in the last 5 minutes?

The Gators’ offense was struggling throughout most of the game. They only shot 38.2 percent from the field and went 8-22 from beyond the arc. They had 12 turnovers as a team.

However, the team’s desire to win led to a great level of intensity and effort. Florida out-rebounded Arkansas, 40-26. The team grabbed 19 offensive rebounds that led to 18 second-chance points. The Gators were attacking the rim with consistency, drawing 21 fouls and hitting 16 of their 22 free throw attempts.

With the win, the Gators are now set up to play against the SEC’s number 1 seed, the LSU Tigers on Friday at 1 p.m. EST. The two teams split the regular season series, and both games went to overtime.

Florida is now facing a WIN and IN type scenario on Friday against LSU. If the Gators beat the Tigers twice in three attempts, they're a lock to be in the NCAA Tournament.