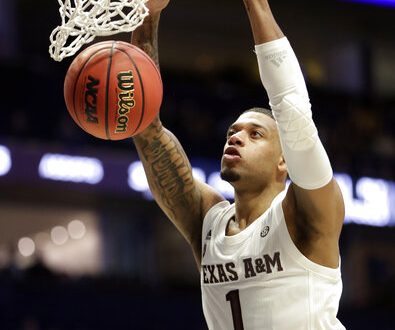 The Texas A&M Aggies and Mississippi State Bulldogs will face off Thursday night in the second round of the SEC Tournament at the Bridgestone Arena.

Star guards Wendell Mitchell and Savion Flagg are both currently playing great basketball averaging a little above 13 points a game and Flagg being aggressive on the boards averaging 7.7 rebounds per game.

Tj Starks has been also putting up numbers averaging double-digit points a game and Christian Mekowulu is helping on the boards with 6 rebounds a game.

A&M has been shooting 30.9 percent beyond the arc and just under 70 percent from the line. The defense for the Aggies has been hot, keeping three out of their last five opponents under 60 points. If A&M can spread the court and get the ball to their playmaker just like they did against Vanderbilt, we can see them not only beat the Bulldogs but see them make a run in this SEC Tournament.

This is the first game for the Bulldogs in the SEC Tournament. Mississippi State enters the tournament coming off a strong end to their regular season. Averaging 77.3 points on 47.1 percent shooting.

“I’m so pleased with our group as we finished the season strong winning five out of our last seven and gained momentum as we enter the SEC Tournament especially with how strong the bracket looks this year,” said Bulldogs head coach Ben Howland. “One thing about these tournaments and the postseason is that its a whole new season and whole new beginnings for every single team involved.”

The Bulldogs are shooting 37.6 from deep and 72 percents from the line. The defense for Mississippis State hasn’t been so hot allowing each of their last six opponents to score over 60 points but their fast-paced offense has overcome that

These two teams met up in the last game of the regular season with a high scoring victory for the Bulldogs 92-81. Both teams will be entering this game with some momentum.

Vegas currently has Mississippi State taking it by seven points but as coach Howland said anything can happen in the postseason, especially with A&M coming off a big win over Vanderbilt.