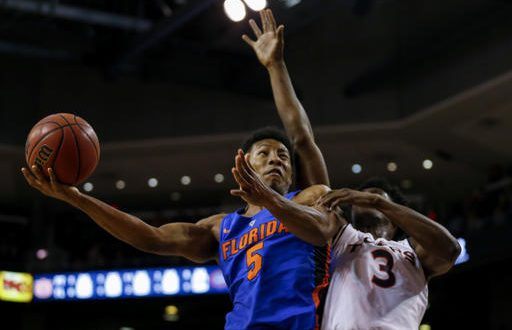 After Dramatic Win Over LSU, Gators Focus Shifts To Auburn

The Florida Gators are looking to continue their run in the SEC Tournament on Saturday afternoon. Florida will be facing off against the Auburn Tiger less than 24 hours after knocking off the No. 1 seed LSU Tigers.

Going into Friday’s game against LSU, the Gators were in desperate need of a win to solidify their spot in the upcoming NCAA tournament. Now that Florida has achieved that, they will be looking to possibly improving their seeding.

The Gators will be looking to avenge their 76-62 loss earlier in the year to Auburn.

Florida will have to focus on the backcourt duo of Jared Harper and Bryce Brown. The two form one of the country’s best backcourts

One of the main reasons the Tigers were able to pull off the double-digit victory was because of Bryce Brown. Brown scored 14 points on 6-for-12 shooting. If the Gators want to keep their SEC tourney run alive they will have to replicate their defensive performance on Jared Harper.

Florida kept Harper under wraps as he only scored eight points on 2-for-5 shooting.  The Sophomore guard showed why he was put on the 2nd team All-SEC list against South Carolina in the quarterfinal. Harper scored 27 points on 6-for-13 shooting. Harper was aggressive the entire contest against the Gamecocks as he made his presence felt at the free throw line. He made 12 of his 14 shots at the charity stripe. The Gators will have to be mindful of their defense and make sure Harper isn’t making continuous trips to the free throw line.

Florida will be playing in their third game in as many days as they tip off at 1 pm.

The semi-final between Florida and Auburn can be seen on ESPN. A radio broadcast can be heard on 98.1 FM ESPN Gainesville and 98.1 FM. Whoever wins will face the winner of the Kentucky/Tennessee or Mississippi State game.